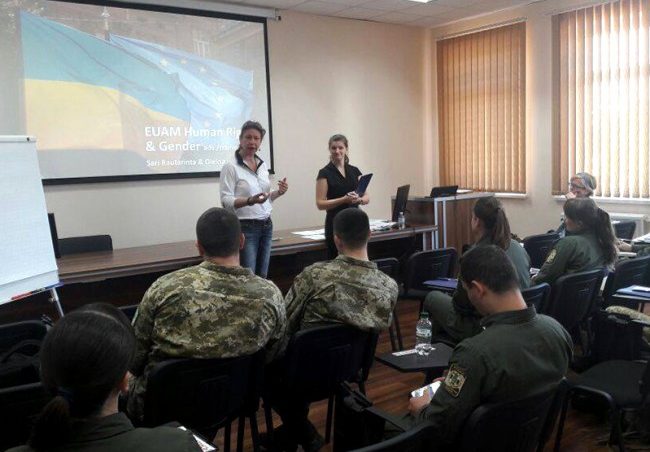 “Border guards and customs officials act as a sort of business card for any country – they are the first people that any guest will meet when they arrive,” said Brian Richard, EUAM’s Head of the Strategic Civilian Security Sector Reform Component and himself a serving customs official in Denmark. “It’s therefore of the utmost importance for any country’s image that border guards and customs officials respect human rights and cultural differences while they go about their vital task of keeping borders safe.”

The training focused on two main aspects. First, the training gave an overview of international and national legislation and guidelines related to equality and non-discrimination. Second, it emphasised the importance of avoiding even accidental inhuman or degrading treatment when meeting masses of people arriving from other cultures.

“I strongly believe that in order to create a service culture in public institutions, we need to try and ‘walk in the skin’ of other individuals and see things from their perspective,” said Sari Rautarinta, EUAM Human Rights and Gender Adviser/Trainer. “This is particularly true when meeting people who are very different from our own background or gender identity.”

The three one day training session took place on 27 & 28 April and 4 May 2017 at Zhuliany Airport. The training was organised specifically in preparation for the Eurovision Song Contest, but also serves as part of EUAM’s wider objective of working with its Ukrainian partners in the civilian security sector to strengthen the protection of human rights in Ukraine.