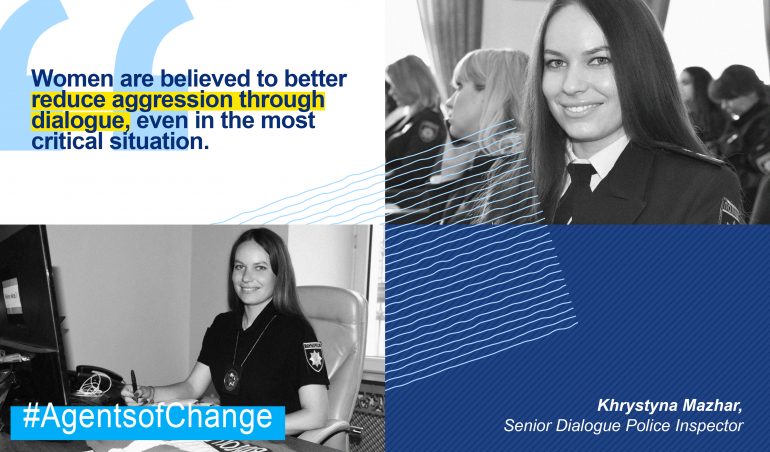 “I always smile when I recall the day my father called me and said that he had seen somewhere in a newspaper that the Donetsk Law Institute of the Ministry of Internal Affairs had announced enrollment to the Traffic Police Faculty. It was in 2013, and at that time, I had just graduated with honours from the Faculty of Law. His words, “Daughter, maybe you should apply? It is perfect for you. You have to try”— became life-changing.  At that time, the Traffic Police Faculty hardly admitted any women – only in sporadic cases, and I wanted to overcome this barrier. I persistently prepared for exams, went in for sports to pass the required standards, and, yes, everything worked out. Then at the university, competing with men made me even more determined, and I had to work hard on my self-confidence. Thus, I became the first female platoon commander in the Faculty’s history.

Thereupon, the fateful year of 2014 came up, bringing certain political events in our country — the Revolution of Dignity and the war. I had to leave Donetsk, leave my friends, acquaintances, and continue my studies at the Odesa State University of Internal Affairs.

In 2018, I was the first offered to move to the new ‘Dialogue Police’ department. It was a new project for the National Police (NPU) since the Ministry of Internal Affairs (MoIA) had approved in 2017 the concept of implementing, in the activities its bodies and units, the Scandinavian model of public order and safety during mass events. Primarily, they implemented it based on the experience gained by Sweden and Denmark: these countries were the first ones in the world that had established such “dialogue” police units.

The dialogue was a prerequisite for reforming the police approach to public order and safety. 2014-2017 mass events in Ukraine were very intense. Most of the time, the many law-enforcement officers involved were not very interested in, nor did they understand, the reasons behind the protests. The mere appearance of police officers at mass events would immediately increase the degree of aggression against the police. The lack of dialogue between the public and the police caused most of the conflicts. This has served as the main precondition for reforming the police’s public order approach.

The first dialogue police units were established in Kyiv and Odesa. The events on 10 April, 2 and 9 May 2018 turned into a real test for the dialogue police units’ staff, most of whom had managed to complete only theoretical courses by that time. It was like their “baptism of fire”. This time, no violations of public order and safety were committed, thanks to the measures of conflict de-escalation put by the dialogue police. The civil society activists acknowledged the efficiency of the police dialogue project that became justified in the city of Odesa. Since then, I have gained experience in nearly 1,000 public events.

The main task of the dialogue police is to establish communication between organisers of the event and the police and secure the constitutional right of citizens to peaceful assembly. Four basic principles are underlying the operations of the Dialogue Police Unit: facilitation of activities, possession of information, constant communication, and a differentiated approach to each participant. During the actions, the key aspect is to work with the organisers and formal and informal leaders of all movements. The crowd is not homogeneous, and there are different groups of people in it. Thus, we always opt for an individual approach for each group. Officers of the dialogue police units are in the crowd to the last. They ask as many questions as possible to understand what people want to get from the action and explain how they may achieve lawfully. It is quite often that the dialogue police officer should first allow the person to be listened to in silence, allow the person to speak out, and only after that, the communication should begin.

The specific features of any mass event include that even a seemingly insignificant mass event may become a severe problem for the entire city. For instance, the disconnection of electrical service in the building located at Seredniofontanska Street… There were no prerequisites for gross violations of public order, and residents of the building were waiting for representatives of the local power authority to solve their problem. It was expected that a meeting would take place, and thereupon, the action would end. Upon arrival, the local power authority’s representatives reported that electrical service would not be re-connected on that day due to a technical error. Thereupon, the building’s residents went out and blocked off the traffic by continuous moving on the pedestrian crossing. It seemed that the problem of one building became a problem for the entire city.

An interesting fact is that according to the Scandinavian dialogue police model, women should make up 30% of the dialogue police unit. Women are believed to better reduce aggression through dialogue, even in the most critical situation. This has often been the case in my practice. When an aggressive crowd is approaching, I am the first to enter into a dialogue, and my partner is joining me. A smile and a quiet discussion do give results. It is pretty often, though, that activists themselves would approach me and say: “No dialogue is possible at this stage, there will be a scrum, you should step aside”.

I recall another situation when the quarantine was announced for the first time in 2020. On 9 May, one of the activists came up to lay floral tributes, and he was totally against wearing a mask. None of his colleagues could persuade him to do so. Knowing his tendency to provocative actions, I did not want the situation to come to a boil, given that there were many journalists and other activists at the venue. My management decided that I had to conduct negotiations with him. After talking to him for 15 minutes, I persuaded him to put on a mask. Moreover, now, he may approach me, and we may start resolving other issues through dialogue during various mass actions.

Today, I also faced a similar situation: we arrived at the scene. It appeared that the water supply authority representatives were disconnecting water supplies to the consumers who had debts for water supplies in the area. There was a lot of police and special forces’ representatives at the scene. When it was time to disconnect the subsequent house put on the list of the debtors, the lady — owner of that house — would jump in front of the operating tractor. The situation went out of control when she said that she would lie under the tractor until all representatives of the water supply authority left the scene. It was cold on the street, and the ground was wet. My superior and I had to negotiate with her for an hour. Eventually, we managed to persuade her to get out, and thus, in my opinion, we managed to save her life.

There have also been numerous challenging tasks during my work at the dialogue police. There were brutal fights and clashes, which required me to go into the crowd and work. We worried that people would stop communicating with us. This is probably the worst. However, even in such moments, we managed to reach an understanding.

A problematic fact in the work of the dialogue police is that you almost always face aggression, you are constantly insulted, and they often turn to personal insults — I am not even talking about “routine” curses. Sometimes, this hurts, and you think to yourself: all right, tomorrow I will request a transfer to another department. Therefore, it is essential to be very stress-resistant, control yourself, and not fail in any case whatsoever because one mistake on the negotiator may cost years of establishing communication with public figures.

From the beginning of my service until today, the number of women in the police has changed significantly. When I first came to the police, I was the only woman in each team I worked. There were also very few women holding managerial positions. But society is changing. And the police is changing too, encouraging more and more women to join the service. For a long time, I have been the only female officer in the department of preventive communication. And only now — in 2021 — more women negotiators currently undergoing training – are joining Odessa District Police Department No. 1.

I always explain what I do in my work and why and involve people in all process stages. A woman should create an atmosphere encouraging the team to move towards unity, involvement, and freedom of thought so that everyone feels like contributing to a common cause.

Early in my career in the police force, I was biased because of my gender. Despite my experience, some male colleagues did not consider me an equal partner and refused to work together simply because I was a woman or their wives disagreed with me being a partner to those police officers. At the same time, some men motivated and supported me. I have probably been lucky with managers who appreciated my professional qualities, to whom I could always turn for help.

My victories, both personal and professional, inspire and motivate me mainly. I believe that one day I will also become a role model for someone. As concerns the person I am today, I am completely and utterly grateful to my parents, who guided me towards the right path, supported and helped me in the most challenging moments of my life. In addition, I have been heavily influenced by our country’s political events: the Revolution of Dignity and war.

I do not think it works out very well for me. I do not know how to find a balance between work and personal life. My father works in the agricultural sector, my mother is a cook, and my sister is a teacher. Everyone except for my family — all my friends — are either police officers or public figures. Police activities took over my entire life.

Even my hobby — reading — is related to my professional activities. I always read something: laws, news; I am learning new methods of negotiation, psychology, and I am watching science films with an emphasis on the negotiation aspects. If I feel that I need to relieve stress, I go to the gym and do sports.”