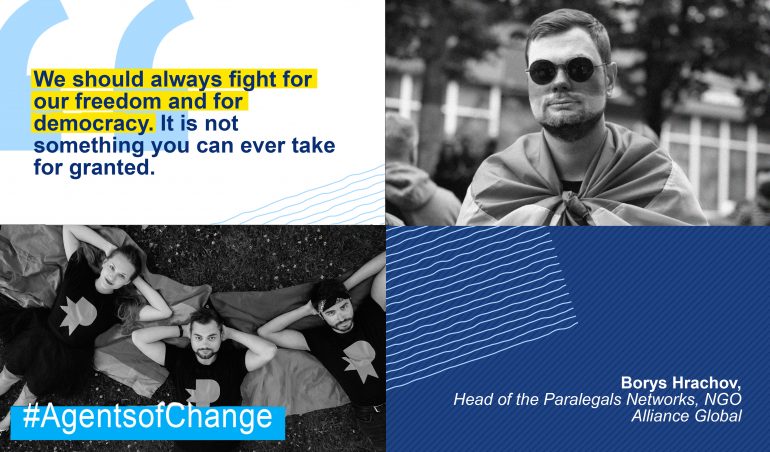 “All my public awareness started at the Revolution of Dignity, in 2013. I was only turning 18 and it profoundly affected me. During all the events on Maidan, I volunteered as medical staff. This experience made me meet many people in the civil society sector, mostly human rights activists. At this moment in my life, I was not sure about what I wanted to do exactly. I just wanted to do something positive for my country. So when the war started in Donbas, in March 2014, I decided to go to the frontline with money and clothes I had collected for the soldiers. With the “Freedom People” NGO, I started to commute twice a month with Kyiv to restock the troops. This experience in Donbas had a huge impact on me. Back there, I realised we should always fight for our freedom and for democracy. It is not something you can ever take for granted. I also realised the human cost it can take to defend these values.

When I turned 21, I decided to leave the frontline, go back to Kyiv and start working for LGBT+ rights. I was recruited as a social worker by “Alliance.Global” in 2016. Funded in 2001, the NGO’s main objective is to provide services for HIV/AIDS and sexually transmitted infections (STIs) among men who have sex with men (MSM). Over time, the organisation has developed a network of community centres in many regions of Ukraine. From HIV prevention, our NGO progressively extended to the promotion of fundamental Human Rights and freedoms, focusing on the progress and consolidation of MSM as part of the LGBT community and countering LGBTphobia.

Joining this NGO was a big move for me because, until then, I was still part of nationalist organisations, mostly promoting homophobic ideas. Of course, I already knew I was gay but I thought it was something I should fight against. I had a lot of stereotypes and prejudices against LGBT. But working directly in contact with LGBT people opened my eyes and changed my feeling towards the gay community.

Progressively I grew up in the NGO and in 2018 I created my own project: @paralegals.ua. Among the people we receive in our community centres, I noticed that a big part of them always had issues with justice. In most cases, they only needed basic legal assistance. In Ukraine, many organisations provide free legal aid, but most of the time they work with poor or disabled people, not with for LGBT+ minority. So we decided to create the Paralegals Networks to provide free legal help for our key groups (LGBT+ but also people living with HIV, sex-workers or drug-users).

We now have two national paralegal networks. When they need our help, usually people contact us directly on our Facebook or Instagram. Our beneficiaries can be gay men who are attacked in the street, homeless LGBT teens cast out by religious families… Specially trained paralegals provide them with primary legal assistance in cases of violation of rights based on sexual orientation and gender identity (SOGI), HIV status, age, etc. We help those making reports with the police, we advise them on the institutional aspects, we also work with legal experts and advocates who can support them.

I deeply believe that even people who do not have this legal background should contribute to fighting for LGBT rights because they are human rights. It does not take much to get involved. Nowadays, I think the main challenge remains political. In this, the LGBT are still used by the radical groups to defend a certain vision of Ukraine. But we cannot make concessions on human rights and we will always fight for it.”