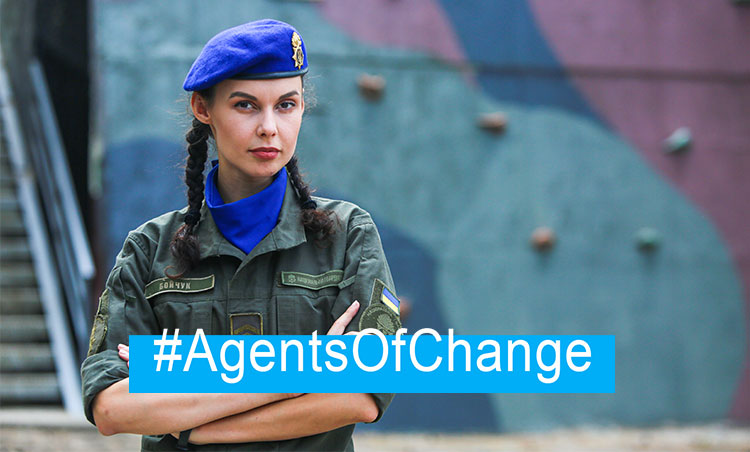 In the latest episode of #Agentsofchange, we speak to the author of #THOSEWHOCAN grant project dedicated to gender equality and gender mainstreaming. The project idea has been developed by Khrystyna Boichuk, fifth year cadet at the humanitarian department of the National Academy of the National Guard of Ukraine (NANGU). In this interview, Khrystyna tells us how her project won funding at the competition organised by the Gender Culture Centre – a platform for enhancing women’s and youth’s rights and capabilities (GCC) funded by the European Union (EU). She also speaks about promotion of gender equality and gender culture among the cadets in Kharkiv and region, and shares some plans for the future.

Could you please tell us how you started to take interest in the gender topic and why?

Khrystyna Boichuk: My interest in gender equality and gender culture dates back to well before the latest competition – when I was asked to captain a team for another competition on gender topic. I immersed in the topic to such an extent that I continued developing it even after that. Being actively engaged in gender mainstreaming activities under the auspices of the Kharkiv Regional State Administration (KRSA) Department for education and science, I once was given a tour around Women and Gender History Museum of the EU funded Gender Culture Centre (GCC). That is how my deeper cooperation with the centre began. I continued taking part in GCC’s projects, until they offered me to apply to their mini-grants competition last year.

#THOSEWHOCAN: where did the idea come from?

K.B.: I must admit that #THOSEWHOCAN is not an entirely new project. Digging deeper and deeper into the gender topic, I decided to advocate more actively for gender equality at the National Guard Academy. Which is not simple in the military, who are traditionally rather conservative and not so susceptible to changes, more so when it concerns women. In 2019, I became Ambassador of the Sustainable Development Goal #5 “Gender Equality” of the SDG-Ambassadors youth program of the Kyiv-based centre for corporate and social responsibility. One of the tasks, as part of the programme, was to develop my own project. Therefore, when I started thinking about it, I thought that it could be worth targeting not only higher education students/cadets, but also those younger children who want to join the military. Hence, I decided to target high-school students of the lyceums and boarding schools specializing in enhanced physical and military training that are quite numerous in Kharkiv and the region. Thus, with my own resources, I carried out a pilot project at NANGU, inviting high-school students for a series of training sessions with academy cadets as mentors. Having received very positive feedback, I decided to continue and expand that project.

What is this project about?

K.B.: Speaking about [gender] mainstreaming, we should be asking ourselves where exactly and what are we really mainstreaming. In my case, it’s about mainstreaming gender aspects in the educational processes, it’s about changing those ideological phenomena that exist in the society. As part of the project, which was launched on October 5, we expect to cover all specialized educational institutions in Kharkiv and region. Luckily, school management assists us, as they understand that we are pursuing similar goals. As part of the project, several groups of students will attend three-day training sessions that are split into four blocks: 1) the basics of gender equality; 2) leadership + public speaking course; and 3) a course on legal aspects. Our main goal is to provide future military and anyone working/serving in the security and defence sector with the tools that will help them better perform their duties in the future. 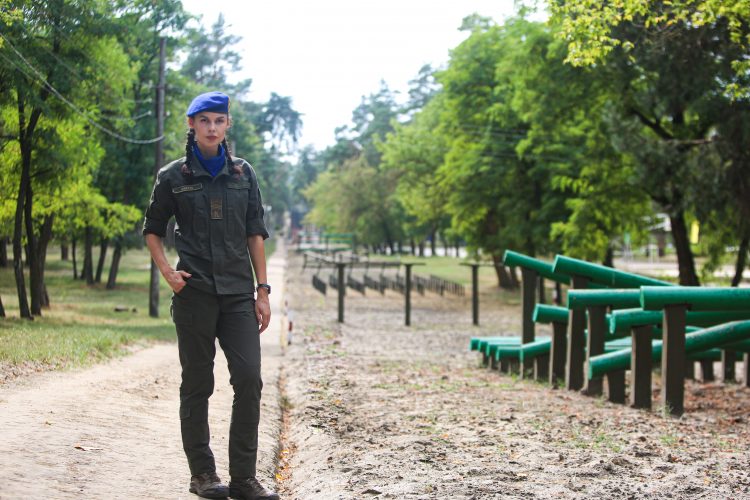 Who helps you implement your project?

K.B.: I am glad that quite a lot of people responded to my call. These are over 20 industry experts, as well as local enthusiasts from universities in Kharkiv (University of the Internal Affairs, University of Civil Protection, NANGU, Institute of tank troops), former and acting staff of the Ministry of Interior’s agencies (National Police, Border Guards, Emergency Service and National Guard), as well as active civil society representatives – who, in addition to conducting training, will serve as mentors for our younger friends. I am glad that our project was joined by female professionals who have achieved some heights working in the security and defence sector and are willing to share their experience.

How long will the project run? Do you plan to extend it should you have such an opportunity?

K.B.: The project is designed for six weeks, and we expect to finish it with a major competition between the teams of the educational institutions engaged in the project. It is quite symbolic that the competition is planned to take place on November 16 – The International Day of Tolerance. Of course, it would be great if the project continued and we had the opportunity to expand it to entire country, as there are many similar schools that specialize in enhanced physical and military training in Kyiv, as well as in western Ukraine. To do that we will require a much wider network of experts that share our goals. And we count on EUAM’s support in the future, whose experts not only would significantly reinforce our team, but would help #THOSEWHOCAN project gain more weight and authority.