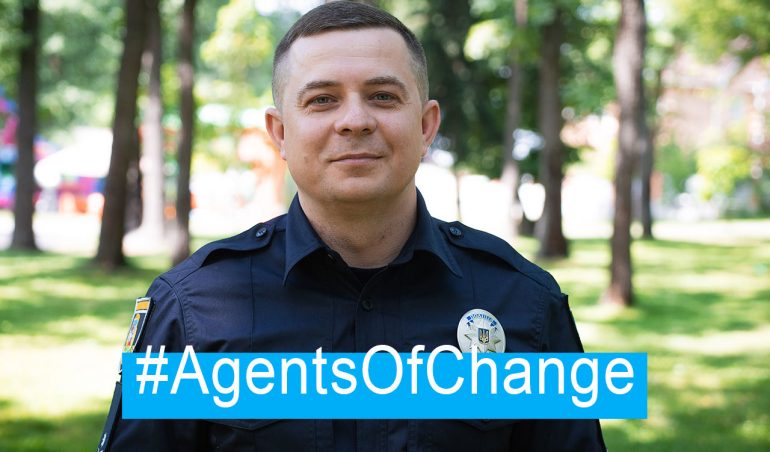 Ukraine’s vibrant civil-society sector plays a critical role in advocating for reform in the civilian security sector, and reform more generally. That is why the EU Advisory Mission (EUAM Ukraine) decided to launch the #AgentsofChange series, meeting with inspiring men and women who try to change the rules of the game in the country by carrying out inclusive projects and by taking action in their community.

Chief of Preventive Sector of the Sub-police station 2 of Bucha Hub-police station, Liubomyr Trushyk here exchanges with EUAM Community Policing Adviser Nina Pelkonen on how dialogue policing is crucial for the safety of the community and establishing trust between the police and the public.

How would you explain what community safety is and what is the role of the preventive police in it?

Liubomyr Trushyk: I believe that today’s community safety model should be about active engagement of the community members to ensure the safety of the locality they live in. Such projects as ‘Community Police Officer’, ‘School Police Officer’, ‘Community Policing’, as well as opening police stations make police services accessible for a larger population. Such community engagement is the most effective tool in protecting human rights and freedoms and in ensuring their safety. Thus, dialogue between the society and the police is constantly improving with the police becoming more open, more responsive to public interests and more ready for change. Dialogue police plays an important role in this, as the projects above are being implemented by it.

How would you describe the preventive work of the police in Ukraine?

L.T.: The work of preventive services is all about preventing law violations and crime.

How would you explain the difference between actual safety and the feeling of safety?

L.T.: I believe that actual safety is directly linked to the general policing in the neighbourhood, when all police units – operative, as well as preventive – work in coordination, thus preventing and promptly solving crime. The ‘feeling’ of safety, on the other hand, is formed based on personal experiences: how safe it is to live in a given neighbourhood, how many police officers one sees on the way home from work or school, as well as when was the last time one had to go to police and whether one received necessary help etc.

Why is public trust so important for community safety? Which role does dialogue play in building trust between the police and the public?

L.T.: Public trust means that citizens actively participate in ensuring their safety. The role of dialogue in these processes is crucial, as trust begins with the readiness to talk to the police, see the results of their work and assist law enforcers in their work.

How can we assess the impact of prevention and dialogue policing on the crime level?

Numbers aside, do you feel that, thanks to prevention and dialogue policing implementation, trust in security institutions, courts, central and local authorities has increased?

L.T.: Indeed, thanks to the implementation of modern preventive practices, the public trusts the police more. This is proven by the public opinion surveys that show that the level of public trust in the police (40.8% as of today) has grown gradually. I believe that dialogue police –a unit that ensures communication between the police and the citizens during public gatherings– has played a key role in this. Dialogue police officers conduct preventive work, explain legal requirements and police actions during public order events.

How does EUAM support capacity building of the preventive and dialogue police?

L.T.: The Scandinavian public order model is widely implemented in the work of the Ukrainian police. It is one of the examples of such support by the international partners and EUAM in particular. Under the project, the Ukrainian police learn to use all possible peaceful tools for organising and conducting public events to ensure maximum safety for all participants. In addition, the Mission participates in other projects, by providing technical assistance and training.

Dialogue Police is without doubt a useful project that is being successfully implemented by the Ukrainian police. 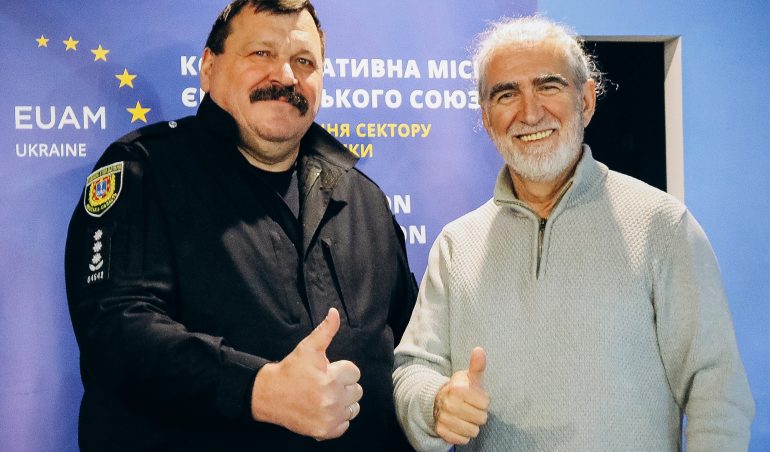 Chief of Police on how dialogue and prevention can build trust and lower the crime rate is licensed under a Creative Commons Attribution-Share Alike 4.0 License.