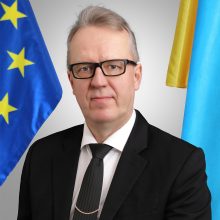 Antti Hartikainen has held various senior positions within the Finnish civil service for over 20 years, chiefly at the Ministry of the Interior. He was appointed Director General of the Finnish Customs in 2012, a post he held until earlier this year. Prior to joining EUAM as Head of Mission on 1 July 2019, he had also amassed significant international experience in the Balkans and the EU neighborhood regions, focusing in particular on border management.

Following stints in senior advisory positions at the EU Police Mission in Bosnia and Herzegovina (2002-04), and the EU Special Representative for the South Caucasus and Georgia (2005), he served as Deputy Head of Mission at the European Union Border Assistance Mission to Moldova and Ukraine from 2005 to 2007. He was then Team Leader and Advisor on Integrated Border Management for the EU Advisory Group to the Republic of Armenia, and Head of Mission for the EU Integrated Border Management Assistance Mission in Libya from 2013-15.

Mr Hartikainen has previously worked in Ukraine, most recently as High Level Expert on Border Management for the High Level Technical and Political Assistance Integrated Border Management Project in Ukraine. He is a graduate of the National Defence University in Helsinki, and apart from his native tongue, he is a fluent speaker of both English and Russian.

Head of Mission is licensed under a Creative Commons Attribution-Share Alike 4.0 License.