Odesa on the eve of 2nd of May anniversary: EUAM Odesa Regional Coordinator’s cautious optimism 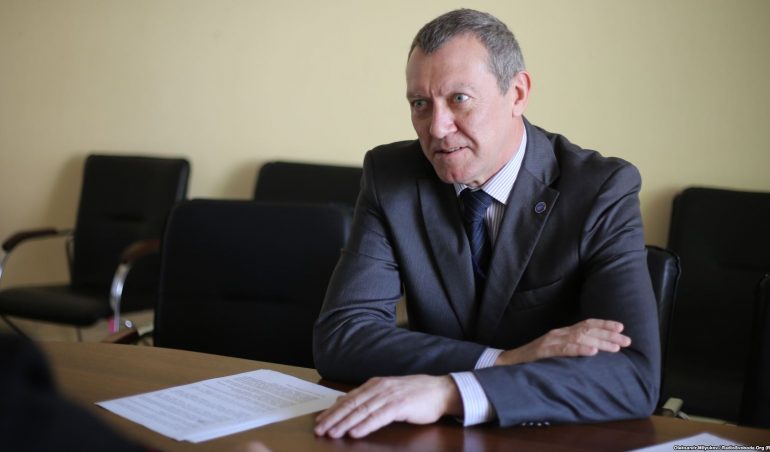 British national Paul Kirwan has been appointed EU Advisory Mission Ukraine (EUAM) Odesa Regional Coordinator slightly over 2 weeks ago. The mission is assisting Ukraine in reforming civilian security sector. During such a short period, Mr. Kirwan has held dozens of working meetings with the counterparts responsible for security in town during the season of highest tensions, i.e. early May. Radio Liberty is the first to interview Paul Kirwan. Among others, we talked about his “cautious optimism” towards 2nd of May 2014 and 9th of May Victory Day commemoration events, and the so called “Scandinavian model” [of public order] that is being implemented by Ukrainian law enforcement agencies.

– Mr. Kirwan, please tell us about your professional experience that you bring to Odesa with you.

In fact, my background is in science, i.e. physics and engineering. However, Yugoslavian crisis in the early 90’s changed my world and I found myself working in humanitarian missions in the Balkans. I worked in the EU rule of law missions in the countries that were going through difficult times. Apart from that, I worked in Iraq, Afghanistan, Sierra Leone, Guinea Bissau and Georgia. All of the missions I worked in were civilian and deployed upon host governments’ invitations. I also spent a couple of years working in Brussels.

– Let’s talk about the European, or “Scandinavian” as it is often referred to, public order model. Odesa regional police authorities have been talking widely about implementing the said model in Odesa police. What is it like?

– After public disorders that took place in Göteborg in 2001, Swedish police, having learnt from that lesson, together with experts from other European states, improved public order tactics during mass events.

According to European (or Scandinavian) model, the emphasis is made on careful preparation of police for the events, as well as on planning (including in the event of escalation), prevention and establishing dialogue [with event organizers and participants]. The emphasis is also made on planning for de-escalation of possible conflicts.

When planning, it is important to estimate correctly the number of police force required. If, for example, there are only several dozens of peaceful demonstrators marching, why would you utilize many fully-equipped police officers, wearing shields and helmets? This will only irritate peaceful protesters and can provoke aggressive reaction. Another observation is that crowd is much better predisposed towards female police officers.

Speaking of force, it should be applied as a measure of last resort only, when all other means have been exhausted. That is why it appears that in Ukraine it would be best to introduce dialogue policing mobile units. The major task of these dialogue police officers, who are well visible in the crowd wearing bright reflective vests, would be to establish normal communication with the event participants, be it a march, demonstration, sport event etc.

– In the past, 2nd and 9th of May events were accompanied by significant tensions – sometimes with clashes, fighting and arrests. We are now on the eve of these mass events. Do you think that Odesa is much polarized? What would you do with that?

True, you can see that NGO’s in Odesa represent full spectrum of political views. Unfortunately, we don’t have a magic recipe to harmonize their relationships. I believe that realizing, by the civil society activists, that everyone has the right to a different opinion that should be respected, will already be an achievement. That is why it is the task of police to keep balance between the citizens’ right to peaceful gatherings and public order.

Several days ago, Head of Odesa regional administration initiated discussions between representatives of different political views (as Right Sector and “Anti-Maidan” leaders were sitting at one table – editor), authorities and law enforcers. Freedom of gatherings and public order during the above-mentioned early May commemoration events were discussed.

EUAM supported Makym Stepanov’s idea of holding such a dialogue before 2nd of May events, as previous such meeting that took place on April 10 (Odesa liberation anniversary) proved effective and the events went peacefully. Those present committed to holding their events in a peaceful manner and in accordance with the laws. That is why, I am cautiously optimistic that they will keep their promises. In addition, with EUAM support, there were a number of public order trainings conducted for law enforcement agencies.

– How about city authorities? Are they involved in communications?

Municipal authorities did not attend our Regional Presence launching event in March and, as of now, there have not been meetings with them. EUAM has worked in Ukraine since 2014 and we support state authorities’ efforts in reforming civilian security sector, working closely with various agencies of the Ministry of Internal Affairs, Ministry of Justice, Security Service, General Prosecutor’s Office, National Anti-Corruption Bureau and Specialized Anti-Corruption Prosecutor’s Office.

In addition to main EUAM headquarters located in Kyiv, there are regional presences in Lviv, Kharkiv and, since March 2018, Odesa. There are 18 staff members (soon to reach 22) working in Odesa, who represent Ukraine, Austria, Czech Republic, Greece, the Netherlands, Denmark, France, Sweden and the Great Britain.

This interview was originally published in Radio Free Europe on 1 May 2018.

Odesa on the eve of 2nd of May anniversary: EUAM Odesa Regional Coordinator’s cautious optimism is licensed under a Creative Commons Attribution-Share Alike 4.0 License.