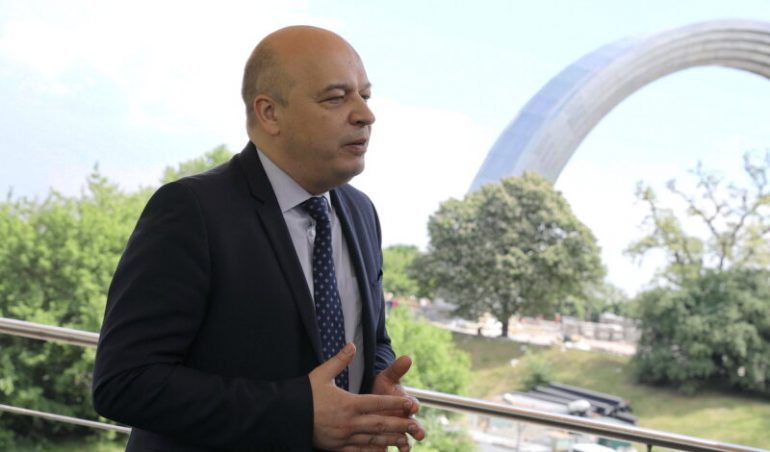 The outgoing head of the European Union Advisory Mission to Ukraine, Kestutis Lancinskas, has told the Kyiv Post in his final interview that he is generally happy with the law enforcement reforms he intensively consulted on through the last three years.

A former senior cop in Lithuania, he gave Ukraine’s reforms a 7 out of 10 so far, adding that he would willingly spend more time advising the Ukrainian women and men who work in law and order.

But it’s not all good news. Ukraine’s progress in some areas gets mixed appraisals from Lancinskas.

While the National Police, according to him, has demonstrated encouraging improvements, the country’s law enforcement legislation and investigation procedures, as well as its judges and courts, remain chaotic, outdated, and ineffective.

The SBU state security service reforms, meanwhile, are stalled thanks to what Lancinskas said was a lack of political will to kick-start painful changes within the powerful secret service that falls under presidential command.

Even though the Ukrainian authorities were not always heeding the mission’s advice, the overall progress of law enforcement is nonetheless notable — now the new administration of President Volodymyr Zelenskiy has its chance to breathe new life into law enforcement reforms.

The 300-strong EUAM Ukraine mission was launched in late 2014, following the EuroMaidan Revolution, to assist the Ukrainian authorities in civilian security sector reform in accordance with EU standards.

Ever since then, the mission, based in Kyiv but with offices in Kharkiv, Lviv, and Odesa, has trained nearly 15,000 law enforcement officers, namely police officers, judges, prosecutors, and SBU officers.

The mission was also engaged in drafting some of the key documents for Ukraine’s 2020 security reform, such as the framework National Security Law passed in June 2018.

Even though the experience of advising Ukrainian authorities was generally positive, Lancinskas admits more could have been done over the past years. This has been a two-lane road — and while EUAM is only a non-executive advisory mission, its success required lots of effort from the Ukrainian side.

“We can bring expertise, but the final decision must be made by our Ukrainian partners and interlocutors,” Lancinskas told the Kyiv Post.

“And sometimes it seemed that we had a different kind of conditions and understanding, and we were not able to achieve another result.” 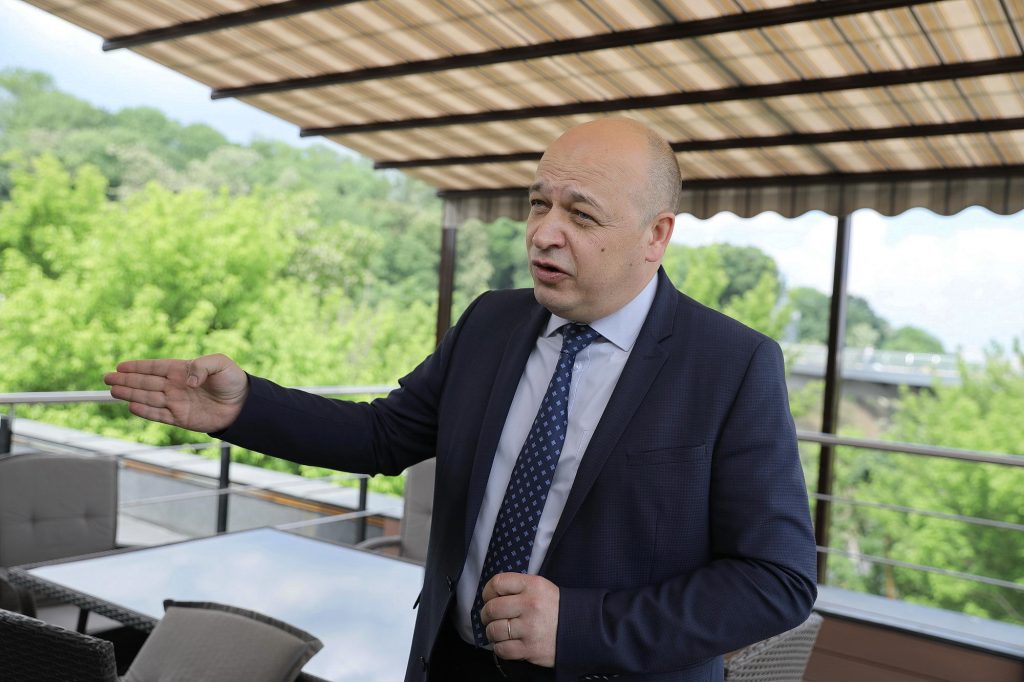 Naturally, the mission was involved in reforming some of the country’s most problematic agencies, such as the General Prosecutor’s Office or the SBU. Changing mindsets proved problematic.

The most troublesome factor that Lancinskas had to deal with in Ukraine was “legislation procedure” — bringing about new rules remains extremely protracted and fatiguing.

This aspect got the disappointing mark of only 2 points out of 10 from the EU envoy.

“In Ukraine, it’s quite complex and long-lasting,” Lancinskas said.

“If we need, for example, to change a law, it takes quite a long time and many discussions. And usually we cannot achieve certain results.”

In many ways, the core issue was the mentality and lack of understanding from Ukrainian lawmakers.

“I remember we had a very hard discussion about the improvement of a criminal investigation,” he said.

“We were discussing with a number of members of parliament a possible merger of operatives and investigators inside of the police. Because what do we have still? We have two lines of operations, two lines of reporting and performance evaluation.”

Those two institutions must be merged, but the importance of this principle was badly understood in Ukraine.

“Because when we are going to a small police station and see that there are 4 or 5 investigators and 4 or 5 operatives, they are sitting in the same office space, but they are communicating via paperwork and the document registration system — it is not efficient (work),” Lancinskas said.

“When we are talking about successful investigations, we should speak about the whole chain of criminal justice,” he added. “And then we have a problem.”

As a result, this ends up morphing into a chaotic nightmare for police detectives and inspectors.

“For example, those lines nearby courts — with investigators staying (for) an entire night just to get into the office of a judge of a pretrial investigation and to get his signature and his endorsement.”

The bureaucratic mess gets even worse with the dire lack of judicial manpower, especially in district courts.

“In the Odesa (Oblast) police officers drive 120 kilometers to appeal to a judge of the Appeal Court to get permission to apply to a court in another district because there’s (not a single) judge left in their districts and so on,” the EU envoy said.

“I was really surprised that police officers must send requests on paper to the institution which is responsible for a car register, for example, and to get an answer on the paper. He’s losing two weeks — just to identify an owner of a car.”

In the 21st century, with e-documentation and electronic filing systems taking over, such heaps of paperwork in Ukrainian law enforcement result in a flawed and cumbersome process.

Numerous obstacles trouble law enforcement at all levels of the country’s criminal justice chain — from police detectives to prosecutors and judges. This is why many criminal probes in Ukraine end up being ineffective: A successful investigation requires a proper system, backed by and enshrined in legislation, Lancinskas said.

The slow pace of judicial reforms in Ukraine have been pointed out by EU officials as one of the reasons that criminal probes into attacks on public activists have been unsuccessful. It’s also one reason why they surged across the country in 2018.

Even the most high-profile cases, such as the murder of Kateryna Gandzuik, a Kherson city anti-graft activist and local politician who was attacked with sulphuric acid in late July 2018, are plagued by examples of inappropriate action and mistakes of high-profile law enforcement officials.

As Lancinskas said, during the probe into the Gandzuik case, some of them “were doing really bad things.”

“For example, Prosecutor General (Yuriy Lutsenko) publishing on his Facebook account the results of the autopsy of Kateryna Gandziuk, is not acceptable, in my opinion — from the ethical and legal point of view,” he said. “The Prosecutor General must know that this is the material of pre-trial investigation.” 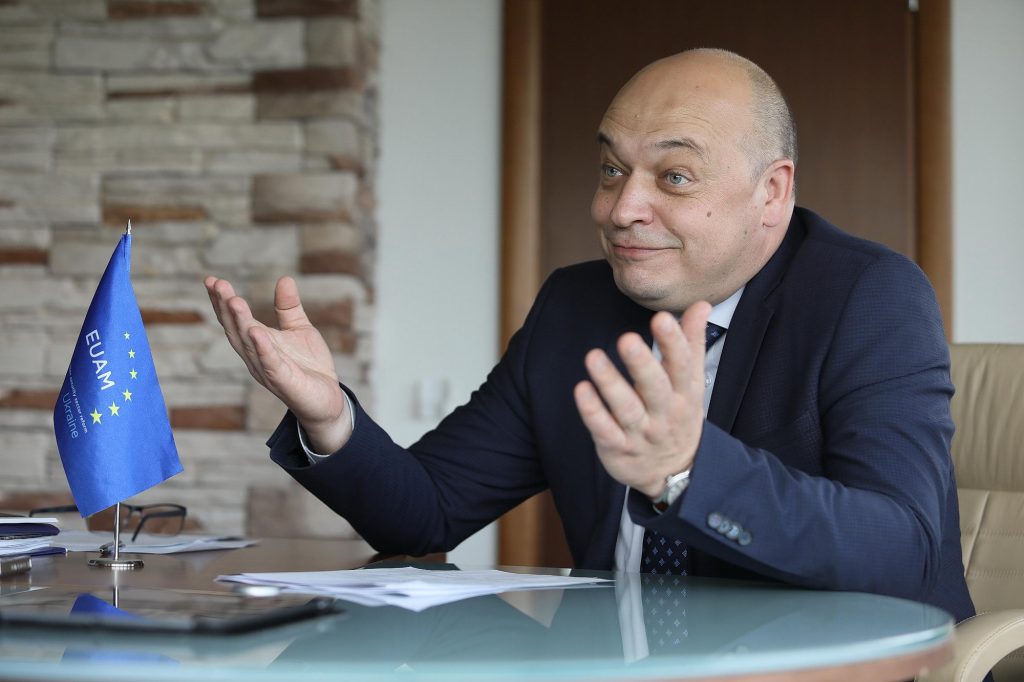 Nonetheless, Lancinskas’ feedback on his three years in Ukraine does contain one notable success story: the National Police.

This 130,000-strong, Western-style law enforcement agency was founded in 2015 to replace the hugely compromised police that had become more like a militia. It received the high mark of 8 points out of 10 from Lancinskas, mostly thanks to what he identified as its openness, successful reforms and cooperation with the EUAM.

According to him, the Ukrainian police have successfully mastered the new public order concept that is based on the best practices of Scandinavian countries and the Netherlands. This concept is especially reliant on the police entering into dialogue and consultations with various political movements or citizen groups in order to preempt public turmoil long before they erupt onto the streets.

By means of dialogue, the police do everything possible to prevent violence and adhere to strictly proportional use of force, only if the power of words fails totally. It is also a community-based approach that is used by the British police, as is known as “policing by consent.”

After extensive training by EUAM, this strategy is now proving itself even amid occasions which could cause serious public order challenges, such as in Odesa each year on May 2, a date which marks the turbulent anniversary of a 2014 tragedy in which 49 pro-Russian protesters died in a fire.

“(Knyazev) was the only high-ranking official in Ukraine who was selected by an international selection panel, and you can see the result,” he said.

“He was selected from over 60 candidates. The final decision was made by (Minister of Internal Affairs Arsen Avakov) and the government, but anyway he is a real professional dedicated to his job, and he’s moving his organization forward.”

Nonetheless, he added, the police reform in Ukraine is still far from being completed: It still demands 3-5 more years of painstaking work.

Almost exactly a year ago, the Kyiv Post sat down with the EUAM chief to talk about the SBU reform, or, more precisely, about the absence of any progress.

As far back as July 2016, the EUAM, together with the United States and NATO envoys to Kyiv, formulated the Reform Concept for Ukraine’s state security service. Then and now it is notoriously known for harassing businesses and abusing its immense power for political reasons.

The Western plan envisaged transforming the SBU into a modern and effective Western-style intelligence agency concentrated only on counter-espionage, counter-terror, and security analysis.

But since then, there was no progress, according to Lancinskas. It got lost in bureaucratic ping-pong, while former President Petro Poroshenko year after year vowed that the concept would be approved “soon.” It was never put into action under his presidency.

“It seems to me that during those three years after the first draft concept was introduced, there was no political will at all,” he said. “No political willingness to even start the SBU reform — that is the main reason why it didn’t happen.

“Without political engagements and political will, it’s not possible to conduct those deep reforms.”

Moreover, even a “proper assessment of the existing situation” with the SBU, as well as the agency’s functionality and asset review, have not been even launched yet.

As Lancinskas said, such a profound audit could clarify how many of the SBU’s 31,000-strong personnel should be dismissed and which of the service departments and functions must be abolished. It would also determine how resources and funding should be used.

Even the ubiquitous secrecy of the SBU should not be an excuse for failing to review it.

“You can do it with internal or external auditors,” he said.

“But those external auditors must be first of all checked for integrity — they should sign documents they will not disclose secrets and so on… It’s a question of the decision — if the decision is made, there will be only technical questions remaining.”

In 2008, his home country of Lithuania underwent their own police reforms and hired the Ernst and Young agency to undertake a thorough, overall audit, including sensitive areas. He recommends the same for Ukraine.

Lancinskas said that newly-elected president Volodymyr Zelenskiy’s team had pledged to the EUAM that it was committed to continue with the reforms process that is advocated by the mission.

“Now we have a new administration, a new president, and let’s wait and see what happens,” Lancinskas said.

“They are only starting now — my impression was very positive. They are studying, they are very dedicated — let’s give them time.”