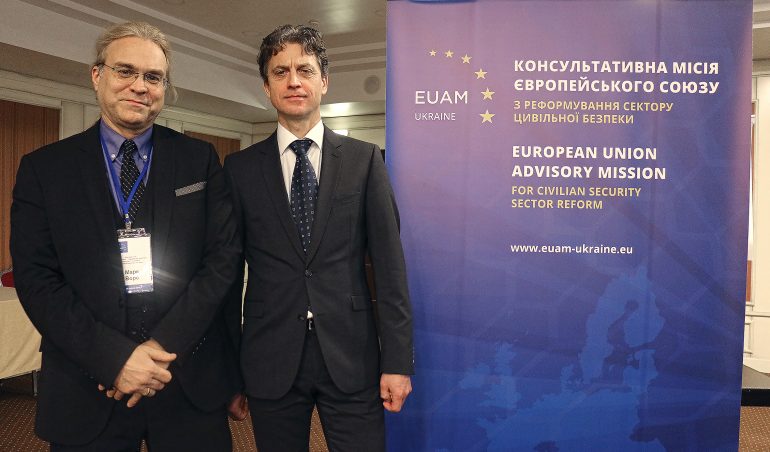 The European Union Advisory Misison (EUAM) Ukraine has been advocating for robust whistleblower legislation in Ukraine. Mark Worth (pictured above, left) is an internationally renowned expert on whistleblowing, and Co-coordinator of the Southeast Europe Coalition on Whistleblower Protection, who at a EUAM roundtable event earlier this year explained why he thinks the concept of whistle blowing is so important for reforming states such as Ukraine

A whistle blower is a person who has inside information about a potential crime or wrong-doing, or about an act of corruption, or a public-health threat, who discovers this information from inside their workplace, and then they report it to somebody to try to fix the problem – whether that is to a regulator, or police, or an investigation agency, or sometimes the media.

So it always concerns an internal situation in an organisation?

That’s right. We’re not talking about somebody who sees a fire next door and who then calls the fire service. A whistle blower is a unique sub-set of a crime witness who during the course of their job – and most wrong-doing does occur in a work place somewhere – discovers something often by accident: money maybe being stolen, unhealthy food, dirty water, pollution, abuse in a day-care centre, something like that. Employees are the ones who report and learn about a vast majority of wrong-doing and public-health dangers. So these are the people who then pass on the information to the authorities who can try to fix the problem.

So, are we talking particularly about the private sector, or public sector?

We’re really talking about both: people who work for ministries, people who work for large corporations, people who work for non-profit agencies. Wherever something can go wrong, if an employee knows about it they should be protected if they report it. The problem is that issuesoften get covered up, they get swept under the carpet, and the management is involved in covering up the crime or act of corruption, so somebody has to step forward and report that in the public interest – and that is what a whistle blower does.

But isn’t it true that most people in those situations, when they see something wrong happening, will be afraid to report that for fear of losing their jobs?

Absolutely. Most people who report something that they find out about inside their organisation, they suffer some kind of retaliation – they’re fired, they’re harassed, even physically threatened or killed. So whistle blower protection legislation should provide legal protections, and physical protections, to shield them from employment consequences and even personal and physical consequences.

In general though, why is whistle blowing, and whistle blower protection, important in any society or state?

It is important because recent history has shown, sadly, that public institutions and private companies cannot or will not fix their own problems internally. If all public institutions operated with integrity and honesty, if all companies behaved properly, we wouldn’t need whistle blowers at all because systems would police themselves. But the stakes are so high in terms of achieving power and profits that corrupt operations persist, because the managers and directors don’t want to turn themselves in – they want to keep making money and achieving power. So it is up to the inidividual employees to expose these acts because institutions and companies have been shown not to be able to police themselves.

But if a country introduces whistle blower protection measures, doesn’t that give employees a tool or excuse to target their employers if they’re not happy with something, maybe something trivial? Isn’t that potential manipulation a real danger?

Not really because people can do that already. People can call the police right now to issue a spurious report. The whistle blower protection law protects people who report information in good faith, things that they believe to be true.

But how do you prove the good faith of the employee? Maybe they are reporting in bad faith!

But we don’t look at the motives. And in reality, if you work at a company or public institution and you find out that the whole place is corrupt, naturally you are going to be disappointed and upset. So the motives don’t matter. If somebodyis reporting a crime that they believe to be occurring, that is the litmus test that they should be protected. Clearly if somebody intentionally reports false information they should not be protected and face consequences under defamation laws. These laws to protect whistle blowers are to protect people who have legitimate information about wrong-doingthat they believe is happening, that they report the information correctly. What we have seen happening in real-life situations is that a very small percentage of whistle blower reports are malicious or vexatious or inaccurate. This has been exaggeratedby many people who don’t like whistle blowers, who want to continue their corrupt practices, who do not want citizens to have rights. So these laws are opposed by corrupt public officials, by corrupt companies, by corrupt individuals, who want to continue their illicit acts. So it makes perfect sense that they would want to try to smear whistle blowers by calling them snitches or vengeful people.

There is often some confusion between whistle blowing, informing, and witness protection. What’s the distinction there?

Do you see any particularities for whisle blowing in the context of law-enforcement agencies?

Well, police have relied on tipsters since the beginning of time. So there is nothing new about citizens calling the police to report things that they see. This is just an extra layer of protection, because what we’ve seen in the last 20 or 30 years, as citizens have felt more empowered to expose corruption, we are seeing more retaliation against workers – because more workers are reporting this corruption. So a whistle blower protection law is just a response to a change in the role of the citizen, because of the internet, because of technology, because of growing frustration with lingering corruption around the world. People are turned on to the notion that ‘hey, I can help stop corruption myself’ – so the idea of anindividual citizen who canstop corruption, expose fraud, embezzlement and political corruption is a new phenomenon. So retaliation is a new phenomenon. So whistle blower protection itself is a new phenomenon.

Are there any countries in the world that are standard bearers for whistle blower protection?

Absolutely yes. Many countries in Europe for example. The United States has a very good programme. Ireland. Serbia. The UK. Australia. South Korea. South Africa. There are about 20 countries I would say that have good whistle blower laws. Most of them don’t work as well as they should, so we try to encourage good enforcement to make sure that the laws don’t serve as a trap. The worst thing is to pass a whistle blower law, the person thinks they are protected from retaliation, they make a report, nobody helps them, and they lose everything.

So what should Ukraine’s first steps be then, as a country that doesn’t really have dedicated whistle blower protection laws?

I think the first step for Ukraine, like any country, would be to identify where are the corruption risks – in which sectors, which industries, which portions of society, and then design a law around that. For example, if there is a problem in the health-care industry perhaps a special system should be set up to help people report misconduct and poor care in the health-care industry. I would recommend very strong systems for people to be able to report crime anonymously, so that they are protected and nobody knows who made the report.

And finally, do you consider people like Edward Snowden and Chelsea Manning to be champions of whistle blowing or not?

I think that regardless of what you think of them individually, of what they did and how they did it, they are viewed by a vast majority of people around the world as being heroes, and as game changers.

So at least they’ve raised awareness of whistle blowing?

Absolutely. The big one was Edward Snowden in 2013, and that made ‘whistle blower’ a household term in every country on the planet. So whether you like what he did or not, Edward Snowden has ushered in a new cultural understanding and societal appreciation of what one person can do to make massive positive changes in the world.

Although EUAM gives advice proactively to the Ukrainian authorities on whistle-blower legislation, it is unable to intervene directly in individual cases