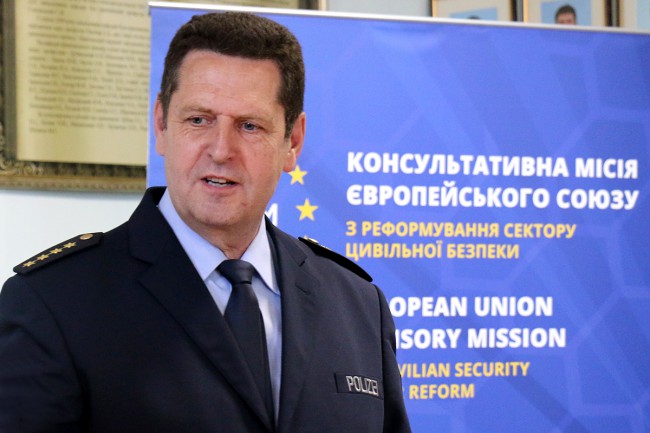 The European Union Advisory Mission (EUAM) Ukraine is this week carrying out a first seminar on witness protection, a tool that law-enforcement agencies use to fight serious forms of crime, organised crime and terrorism. EUAM is advocating for an independent witness protection unit in Ukraine, and this was one of the issues discussed at the seminar, where an Austrian witness-protection expert addressed officers from Ukraine’s law-enforcement partners. EUAM Head of Operations Udo Moeller elaborates here on the concept of witness protection.

What exactly is witness protection, and why do witnesses need to be protected?

First of all, it is important to put this into proper context. Witness protection is a fairly radical criminal-investigation measure used by law-enforcement officers, and usually only used as a last resort. The word “witness” can be a little misleading because we imagine a witness as somebody who witnesses a crime. But really it refers to anybody in possession of information about a crime, and who as a result of holding that information faces a threat to their safety. In most cases, we are talking about serious organised crime, and most “witnesses” are former criminals who want to change their ways. The world of serious crime is an ugly one, and hard to escape from. Information offered by former criminals can be crucial in helping police investigators solve crimes, but ‘informants’ may need protection after divulging this information. There are other less extreme ways to protect people that offer information to police, such as 24/7 close protection (where a ‘handler’ accompanies and guards a witness), CCTV, or restraining orders. Witness protection units carry out a threat and risk assessment, and perhaps a psychological assessment, and if they consider the threat big enough, they can place an informant on a ‘witness protection programme’.

Aren’t witness-protection programmes too expensive, especially for countries with state budgetary challenges such as Ukraine?

Not necessarily. The process of measuring costs to the state is multi-faceted, and if you take a broader, long-term view, then witness protection programmes can actually end up saving the state money. Remember, we are usually talking about serious organised crime here. So if police manage to prevent crime through such programmes, that prevention saves a lot of money. Consider, for example, the cost to society of serious crime, then think of the cost to the state of incarcerating criminals. A study conducted in Sweden showed that the average cost to society and the state of the activities of one serious criminal over a 15-year period was €2.5 million, which is much greater than what a witness protection programme – that may have prevented the crime – would have cost. There are also a variety of witness protection programmes, some expensive but others less so. So we must look at the bigger picture.

Do people on witness protection programmes get new identities and go to live abroad, like we see in movies?

Just as witness protection programmes are a last-resort option, there are also last-resort options within protection programmes. In cases where, for example, informants are given new identities, a new passport, and relocated to elsewhere in the country or abroad – these are exceptional cases, but they can happen. Some countries are harder to hide in than others, so it really depends on the circumstances and the threat level. A change of identity is an enormous job – there is more to it than merely inventing a new name and new passport; you must create a whole new personal history, a profile, for it to be successful. Witness protection is better understood as a support tool, and more typically witness-protection units provide support such as accommodation, support in finding employment, training courses, and so on. Programmes are also not necessarily for life; even people who have their identity changed can revert to their “former selves” if the threat to them subsides. It should be pointed out that witness protection programmes are not offered to anybody; there is an application process to be followed. In Finland, for example, approximately 20% of witness protection applicants get approved. Investigators will not accept information at any price – they must carefully weigh up each case on its own merits. There is a danger that people under witness protection programmes to treat it as a bargaining situation, and use blackmail to demand more benefits in exchange for more information, so the process must be carefully managed. But in general witness-protection programmes work out successfully – once individuals see the programme through and follow the Memorandum of Understanding, they remain safe.

There are very few EU member states without dedicated witness-protection units, which are usually within police forces. As far as I know only smaller states such as Malta and Luxembourg do not have such units. There is no one-size-fits-all system, and there is no perfect system. A country’s approach to witness protection varies from country to country, depending on cultural, geographical and political factors. In Europe, the UK, Germany and Italy have the longest-standing witness-protection models. But just to illustrate how relatively recent a criminal-investigation tool it is, the UK started its witness-protection programmes in the 1980s. The USA began a little earlier, as a response to the extreme mafia criminal activity it had to deal with.

What does Ukraine’s witness protection programme look like, and how has EUAM supported Ukrainian agencies in this regard?

At the moment in Ukraine, there is no established witness-protection programme in place, but officers from the National Police and Security Service do provide close-protection support. What EUAM would like to see is an independent witness-protection agency or unit in Ukraine, along the lines of the National Anti-Corruption Bureau. This independence would help to avoid competition, or a lack of trust, among law-enforcement agencies. We have already created an inter-agency working group to discuss the idea, and everybody in that group agrees that there should be a national witness-protection body in Ukraine. There was a law on witness protection passed in 1993, but it is outdated and should be either updated or replaced. Meanwhile, EUAM will continue advising our partners on witness protection, and this week’s seminar is a major contribution to that.