‘The creation of the new Supreme Court will set the tone for future reform. It is important that it succeeds’ 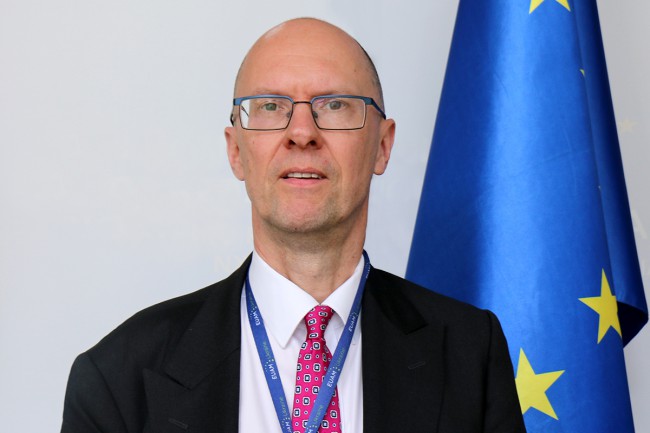 On 2 June 2016, the Rada approved significant reforms of the judicial system which will gradually take effect over the coming months and years. A new Supreme Court and a new Court Security Service, to name but a few developments, should come into being. On paper they should strengthen the independence of the judiciary. How far they will in fact do so will depend on further actions, including the adoption of additional legislation. In this interview, EUAM Senior Adviser on the Judiciary John Cubbon provides his thoughts on the current state of play and future challenges.

Let us start with the basics. Why are reforms necessary? What are the main challenges facing the judicial system in Ukraine?

I think there is a widespread perception that a large number of judges, but by no means all, have been involved in activities that they shouldn’t have been. And much of this goes back, I think, to the early 1990s, when there was a something of a free for all, where existing structures broke down and there was a perception that the only way of getting anything done was to pay money under the table. Of course this was made worse by the legacy of Soviet-era judicial practices. This makes it difficult – understandably difficult – to have the sort of standards of judicial independence that Ukrainians and the international community supporting them would want to have.

Creating a culture of judicial independence is not something that can be done overnight. All judges are human beings, but it is possible to create a culture among them in which there is a strong sense of simply finding out objectively the facts and the law and then applying the law to the facts. This is the culture the reforms are designed to support.

There have been many reforms of the judiciary since Ukraine became independent, including after the Revolution of Dignity. What is the significance of the package of reforms passed on 2 June 2016? Are we going to have a similar discussion in a couple of years’ time?

Well, I think that one thing that is significant with the package of reforms approved by the Rada on 2 June 2016 is that the Constitution has been amended almost entirely in line with the recommendations of the Venice Commission, which is the body of constitutional law experts in the Council of Europe. What this means is that the Constitution meets high international standards on ensuring judicial independence.

In the context of judicial reform, for a long time people argued that for individual reforms to be effective, the Constitution would need to be changed. This is now in the process of being done, so the foundations are there for a system where judicial independence can flourish. There may be some tinkering that needs to be done in the future, but nothing radical. That’s extremely important.

Tell us a bit more about the changes

The reforms change the composition of the High Council of Justice that is responsible for the careers of judges to give judges greater involvement and to remove or reduce the influence of other branches of power, for example the government and Rada. It is very positive that the power to appoint, dismiss and transfer judges is in the hands of predominantly judicial bodies, even if the President currently retains the power to move judges as an interim solution.

The other significant change, which really stands out and is taking place as we speak is the formation of the new Supreme Court. This is a fairly radical change, because the existing Supreme Court and the high specialised courts beneath it will cease to exist and will be replaced with a Grand Chamber and four Cassational Courts together constituting a single new Supreme Court.

How will the applications process work?

The judges currently on the Supreme Court and high specialised courts will be able to apply for jobs in the new Court. But so will any other judge with at least 10 years’ experience, senior academics or lawyers. The process for selecting new judges has already started, applications were submitted to the High Qualification Commission in November and December 2016 and 653 were found to meet the minimum requirements.

The names and positions of the 653 people who met the minimum requirements are available on the website of the High Qualification Commission, so the process is taking place with a high degree of transparency, which is positive. There are a lot of judges among them, but there are also academics and lawyers. One expects there will be some continuity with the past but one also hopes that there will be some new faces, of people who are not tainted by association with the past and who can help build trust in the judicial system.

The written tests as part of the application will take place on 16 and 21 February and then there will be interviews based on a dossier which gives information on the background of the candidate. The interviews will be live streamed on the internet so it will be possible to observe how they are going.

If the formation of the new Supreme Court goes well, which is the hope, then it sets the tone for the future. As part of the reform, new appeal courts will be formed and also all remaining judges will be vetted as they will have to go through a qualification evaluation. It will take several years. How successful this will be remains to be seen, but as I say, I think the first steps are significant.

You’ve mentioned the positive aspects of the reform process – e.g. greater judicial independence, greater transparency. Are there any areas you think need greater attention or clarity?

I think ensuring court security is one area that appears to have fallen between the cracks and is not currently being given the attention it deserves. Since November 2015, when the legislation creating the National Police of Ukraine came into force, there is no body dedicated to court security and this presents significant risks. The current temporary arrangements that have been put into existence depend on the police and the National Guard, but these organisations have other priorities. So, unfortunately, there is not a level of court security that one would want there to be.

Increasing the salaries of people working in the judicial system, is one area that the government is paying attention to, but resources are currently very limited and so it remains to be seen how this will play out in practice. A further problem is that for various reasons a large number of judges have been leaving their positions in recent months.

Civil society has expressed doubts about both the High Council of Justice and the High Qualification Commission, but I for one feel that we are on the right track for both bodies.

As I said however, changes won’t happen overnight but there are some encouraging developments. One area which doesn’t need immediate attention, but may need to be looked at in the future is that there are very many bodies that deal with judicial governance.

As well as the High Council of Justice and High Qualification Commission, you’ve also got the State Judicial Administration, which essentially deals with logistics, though not with recruitment or selection of judges. Then you have the Council of Judges and the Congress of Judges which are judicial self-governance bodies, as opposed to what I have been calling judicial governance bodies. It’s a structure that is really too complicated, and this has been pointed out by the Venice Commission. It would require a lot of legislative and constitutional changes to straighten that out however, and the priority at the moment has to be ensuring judicial independence.

What is the EU Advisory Mission doing to assist the reform process?

Our main role in judicial reform has been strategic advice and also more recently coordinating information sharing amongst international and national stakeholders in the reform process. Strategic advice can mean acting for example as observers in the selection of the new Supreme Court or looking at practice in EU Member States that might be useful for our Ukrainian partners. It depends on the issue. Recently, there was concern about how to ensure training for new senior judges who had not previously worked as judges, so we looked at systems in Cyprus, Ireland, Malta, and UK, where this is more common. We also helped with advice on how written examinations are organised for judges in some EU member states.

In terms of coordination efforts, we have regularly held meetings since last September with international and national partners to share information on support for the formation of the new Supreme Court. This has proven to be very useful.

‘The creation of the new Supreme Court will set the tone for future reform. It is important that it succeeds’ is licensed under a Creative Commons Attribution-Share Alike 4.0 License.