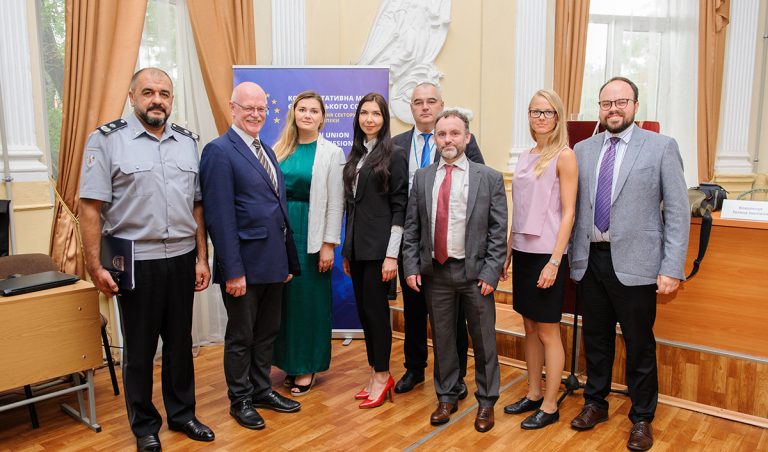 In September 2017, the Ukrainian government presented the draft Strategy of development of the Ministry of Internal Affairs of Ukraine 2020 to the public. The document lays out a set of changes to be introduced in the Ministry and its agencies over the next few years.The European Union Advisory Mission (EUAM) Ukraine, which was invited by the Ukrainian authorities in 2014 to assist with reforms aimed at establishing a civilian security sector that is efficient, accountable, and enjoys the trust of the public, contributed to the creation of the Strategy. We talked with the EUAM experts who worked on the project, Laidi Surva, Lead Advisor on Good Governance, and Ievgen Kylymnyk, Good Governance Officer, who explained the details of the Ministry’s plan.

Why the Ministry needed this strategy

Laidi Surva: The Ministry of Internal Affairs already had a strategy in place as of 2014. This included a set of goals, some of which have already been reached. Others still need attention. Moreover, new challenges have arisen, which need attention. One of the reasons the Ministry needed this Strategy is so that it could be better prepared for the challenges ahead and be better able to prioritise its activities. It is important to have a vision that is clearly stated to the public. Setting clear and agreed upon priorities helps achieve a better focus, which leads to results.

Ievgen Kylymnyk: There were also very pragmatic reasons for the development of this Strategy. The strategy adopted in 2014 did not foresee any steps after 2017. It is expiring and would have resulted in a gap in planning. The new strategy is the next logical step of the Ministry’s policy.

Laidi Surva: It’s part of a normal cyclical process. When one policy cycle concludes, you identify challenges and set goals for the next cycle.

How the process started

Laidi Surva: The initiative came from the Ministry of Internal Affairs. Last year, the Cabinet of Ministers asked ministries to develop action plans.

Ievgen Kylymnyk: Yes, it all stems from the larger policy cycle. Ukraine adopted a new National Security Strategy in 2015. After that, it established a concept for the development of the security sector. Based on the legal framework, the Ministry of Internal Affairs was tasked with developing new plans for implementing these documents. It was decided that the best idea, given there was no updated strategy in place, was to create the Strategy 2020.

The role of EUAM

This was a daylong event where representatives from these groups discussed the challenges associated with the system and identified priorities for the future. As a follow up to this session, Ministry officials have held numerous one-on-one meetings with representatives of the subordinate agencies to define priority areas. We also helped organise similar strategic sessions in the various regions of Ukraine in September 2017. It is a good sign that the Ministry went to the regions asking for input.

Ievgen Kylymnyk: EUAM provided substantial methodological support. We helped to outline the key steps to be taken in this process according to EU norms. The Ministry was very receptive to these comments and it was able to adjust to their own plans and deadlines to some extent.

We also facilitated input from EUAM’s subject-matter experts on specific topics like counteracting crime and the creation of a service culture.

Laidi Surva: We did not just submit written comments. We also had a discussion session with the Ministry and EUAM advisers to discuss priority areas, determine whether the measures in the Strategy were sufficient to overcome the challenges, and ensure the measures adhered to practices in other European countries.

The draft Strategy was made public at the beginning of September and was opened for comments until the beginning of October; the consultations are now closed. Many comments were submitted by subordinate agencies, civil society, and experts. EUAM has also provided additional input. Now the Ministry is going through these comments and amending the text of the Strategy where necessary.

Most important points of the Strategy

Laidi Surva: All the priority areas the Ministry identified are pressing points that need attention. The most important point for me is focus on citizens. This requires a change in mindset. The Strategy is focused on changing the way the system works, and this is a big challenge indeed.

Ievgen Kylymnyk: The Ministry is using the Strategy to reaffirm its commitment to working in a new way and to establishing new managerial practices within the institution itself. Laidi and I are policy nerds. We are really happy to see a clear structure and goals. In Ukraine, a strategy is often simply a list of actions that is almost unreadable for an ordinary citizen. One of the features of this Strategy is that it is easy to understand.

Laidi Surva: This is actually one of the things we discussed with the agencies and EUAM advisors: if you are just a regular citizen, would you understand what is in the Strategy? We tried to test whether the text made sense in this regard.

The Strategy’s influence on the everyday lives of Ukrainians

Laidi Surva: If you look at the priority areas, the first one is, “Safer living environment.” Basically, the focus is on how safe and secure citizens feel in their own communities. Moreover, the Strategy foresees changes in the way the agencies of the Ministry of Internal Affairs interact with Ukrainians. More community involvement is expected to ensure security.

For example, the Ministry is planning to use more volunteer firefighters. As a result, people will have the opportunity to contribute to the safety of their community. For me, an emphasis on building relations between the state and citizens is hugely important.

Ievgen Kylymnyk: We hope that the Ministry will provide broader services when the Strategy is implemented. One of the measures identified in the Strategy is to broaden the approach of service centres. For instance, if you are a business and you want to license your facility to attest that it meets fire safety requirements, you should not have to go from office to officer. You should be able to access what you need through just one service point. This will increase customer satisfaction and minimise opportunities for corruption.

EUAM is also promoting the concept of community policing to build stronger links between the police and the community they serve.

Finally, based on the EU experience, the Ministry is trying to introduce the idea that safety is not just the responsibility of the police, but also of each individual citizen. For this purpose, Ministry officials are planning to organise broad training programmes on safety awareness and on how to act in emergency situations.

Laidi Surva: The Ministry is also putting more emphasis on the prevention of crime and emergencies, rather than focusing solely on responding to these situations. This is common practice in other countries, because it reduces the expenses associated with crime and emergencies.

Experts from the EU Advisory Mission Ukraine stress the importance of reform of the Ministry of Internal Affairs is licensed under a Creative Commons Attribution-Share Alike 4.0 License.