Criminal investigation: a complex process with a simple goal 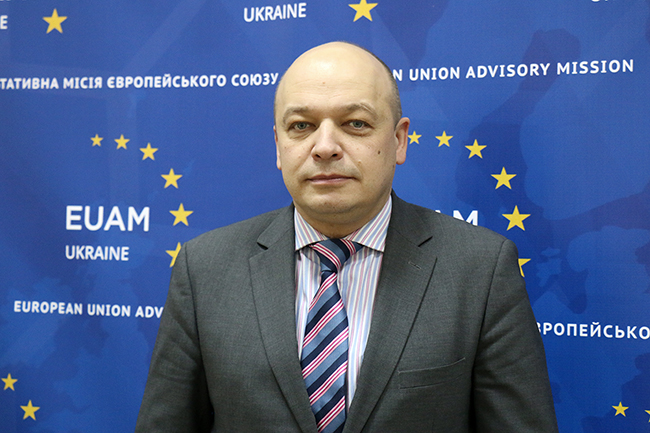 Criminal investigation is central to the duties of law-enforcement agencies worldwide. It can be a complex process, but it has one simple goal: to restore and uphold justice, and ensure security for people in their communities. Criminal investigation is at the heart of law-enforcement and rule of law activities because the level of trust Ukrainian citizens have in justice-delivery hinges on the success of criminal-investigation actions.

In our society, there is quite rightly an intolerance towards crime, and an expectation that those violating the law should be accountable and brought to justice. This is a cultural norm which provides the basis of our hopes and expectations as citizens. Law-enforcement agencies such as the police and prosecution are servants of the state who carry the heavy responsibility of satisfying such expectations. That is the nature of democracy.

The European Union Advisory Mission Ukraine (EUAM) has designated criminal investigation as one of its five priorities – we work with agencies such as the National Police, Prosecutor’s Office, State Security Service and the National Anti-Corruption Bureau to improve criminal-investigation procedures and techniques. Although there is no fixed “standard” in criminal investigation across the 28 member states of the EU, there are certainly best practices that are universal. For example, officers investigating criminal cases must respect human rights – the rights of victims of crime, but also of suspects.

Resources are key. A law-enforcement agency cannot investigate crimes without sufficient financial, technical and human resources. People deliver success, but they need the right tools to be able to deliver. Then there is the matter of management and coordination of criminal-investigation teams. It might not be immediately obvious, but for me this is the area that can most undermine the process of investigating crime, and perhaps the area with the greatest need for improvement in Ukraine.

Allow me to explain briefly. One must remember that for the investigation and prosecution of any single crime – before a case gets to court – you have the involvement of both police and prosecutors, as well as different personnel within the police. For that crime to be investigated effectively and professionally, careful planning and coordination between all the relevant players is needed. One of the real dangers is that these various players operate in competition with one another, rather than as a team. If there is no cooperation, the criminal-investigation process becomes compromised and cases can remain unsolved.

Typically, a prosecutor supervises the investigation of a criminal case, and then takes evidence that is gathered by the police to court. In Ukraine, two specialist police officers are responsible for gathering that evidence: an ‘operative’ who works in the field to gather intelligence; and an office-based ‘investigator’ who usually leads the investigation and pieces the case together by turning that intelligence into evidence. Standard practice in EU countries is to have one investigator, combining both operative and investigator functions.

Unfortunately, in Ukraine operatives and investigators often operate under separate chains of command, and consequently there is a lack of coordination and communication between them. Unlike in the EU, they also have different powers. It is unacceptable that in a small police station you can find officers working on the same cases, along the same corridor, not communicating properly. It is amazing to think that criminal investigations can break down over something as simple as communication, but that is the reality.

Solving crime is about finding the right balance between proactivity – for example, better analysis of trends in order to improve prevention – and reactivity. Criminal investigation is a reactive activity that must be oriented towards a final goal, and this can only be achieved by reducing bureaucracy and increasing efficiency.

Thankfully, I see signs that Ukraine is moving in the right direction. Detectives working at the National Anti-Corruption Bureau of Ukraine are, in effect, investigators and operatives in one. I believe that this is the model the National Police should also adopt. In principle, police officers should be multi-skilled, whether in general policing skills such as patrolling, traffic policing, public order, dealing with minor crimes, or in specialized areas such as criminal investigation. That is common practice in the European Union and it is one good way to increase efficiency.

The good news is that the partnership between EUAM and the National Police has now stepped up a gear through a pilot project that has merged investigators and operatives in Borispol police station in Kyiv oblast. The result of this pilot project will be a reduction of bureaucracy and an increase in efficiency in criminal investigations: operatives will take on investigative functions and vice versa, and both will operate under one chain of command, as a team. It is a first step towards creating an Institute of Detectives in Ukraine, but in the short term the merger project can produce excellent results. In policing, working in pairs automatically improves productivity, and also drastically reduces the chances of corrupt activity.

By definition, a pilot project is a small-scale, focused, experiment of something new. But longer term, EUAM expects that the merger project will serve as a template for other criminal-police departments throughout Ukraine to follow. That is the vision. The pilot project will mean not only a re-modelling of criminal-investigation teams; EUAM will also be providing comprehensive training to officers in Borispol and other police stations that carry out the merger project. The Mission this week donated IT and forensic equipment worth over €35,000 for the criminal-investigation team in Borispol station, and last week – together with a trainer from the Kyiv Police Academy – delivered training in the use of the forensic equipment.

We are delighted that the Kyiv Regional Prosecutor’s Office has also shown such enthusiasm for the project. Through this kind of cooperation, we can set a good example and make a meaningful contribution to the reform process in general, and reform of the civilian security sector in particular.

It is easy to forget that police officers are themselves members of the community; they have a link to the community and they have a duty to serve that community. EUAM is busy developing initiatives in several areas such as criminal investigation, community policing, public order, human rights and anti-corruption. But one of the things that is common to all of those is the idea of duty to the community. That must be the beginning and end point of everything we try to achieve.

Criminal investigation: a complex process with a simple goal is licensed under a Creative Commons Attribution-Share Alike 4.0 License.