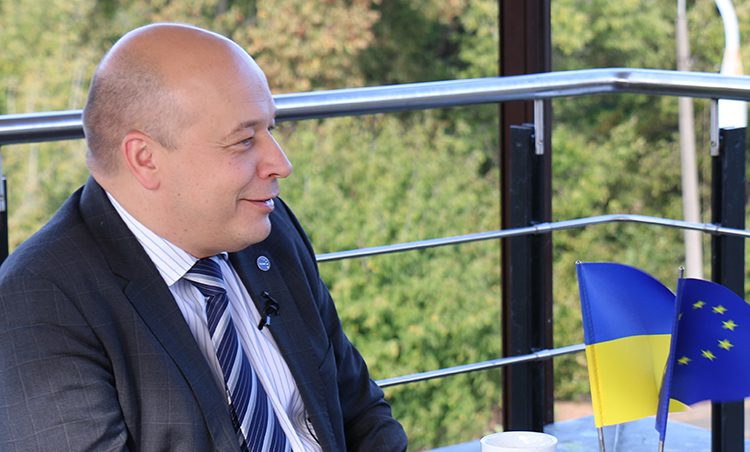 This op-ed by EUAM Head of Mission, Kestutis Lancinskas was originally published in Ukrainska Pravda on 1 March 2017.

The imminent announcement by the Asset Recovery and Management Agency (ARMA) of a competition for the recruitment of 25 staff members is good news for Ukraine and its fight against corruption. Over the coming months, ARMA will be building the foundations of the organisation and the selection of staff members is central to this.

For its part, the European Union has now stepped up its support for Ukraine’s fight against corruption. Indeed, support for the institutional development of ARMA will be one of the priorities of the EU Anti-Corruption Initiative in Ukraine (EUACI), so far the largest EU-funded project (€16.3 million) in the area of anti-corruption that is being implemented by DANIDA and that began operations last December. The European Union Advisory Mission Ukraine (EUAM) will be working in close coordination with EUACI so that support for the new agency is optimised – EUAM is ready to support ARMA to the fullest of our ability.

I appreciate that many Ukrainian citizens may not yet understand the functions of ARMA, and are rather more concerned by more immediate issues – they want to see tangible results and corrupt officials brought to justice. ARMA, however, is a key piece in the anti-corruption jigsaw. Together with the National Anti-Corruption Bureau (NABU), the Special Anti-Corruption Prosecutor’s Office (SAPO), and the National Agency for the Prevention of Corruption (NAPC), ARMA is one of Ukraine’s new agencies tasked to tackle corruption. It is central to the country’s reform efforts, and it will need the support of both government and the general public to develop into an independent, effective, agency.

ARMA is a brand new agency, a central executive authority that answers to the Cabinet of Ministers. Its task is two-fold: to trace stolen or ill-gained assets and detect where they are being hidden; and to manage assets that have been confiscated. An effective ARMA will ensure that money stolen from the Ukrainian people is restored to the state budget. The size of the challenge facing ARMA is clearly huge, because this type of work is new for Ukraine, and in particular because the effectiveness of ARMA is so closely linked to the progress of Ukrainian law-enforcement agencies.

To take just one example, ARMA is not likely to succeed unless NABU also succeeds. This is because NABU is investigating the same people whose assets ARMA must trace and manage. EUAM believes that the best way for Ukraine’s anti-corruption agencies to succeed is through full independence, by being fully resourced, and through proper cooperation and coordination with other agencies. Any institutional rivalry between agencies will compromise the fight against corruption. It is encouraging that NABU has already given assistance to ARMA, passing on some of the lessons it has learnt since its own baptism just two years ago. Looking further down the road, EUAM and other international partners look forward to the establishment of the High Anti-Corruption Court as soon as possible.

In the initial stages of operation, international support for ARMA will be crucial. The agency is already reaching out to other similar agencies in the European Union, and EUAM is doing everything it can to facilitate this. Some context is needed here – even in the European Union, asset recovery and management is a relatively recent and fast-evolving branch of law-enforcement. It is a unique exercise that requires a high level of expertise that relies heavily on domestic coordination and international cooperation. Looking ahead, a top priority for ARMA will be to learn from the experiences of asset recovery and management agencies in the EU.

EUAM believes that the fight against corruption requires continued political will and commitment to tackle it. Although the creation of ARMA and the other anti-corruption agencies is commendable, corruption is still pervasive in Ukrainian society and reforms need to be accelerated.

The frustration of the general public is understandable. Ukrainian citizens are tired of corruption, and fed up with the negative impact endemic corruption has on their daily lives. However, expectations should also be realistic. We must remember that in EU countries that underwent deep reforms – such as Poland and Lithuania – it took several years for anti-corruption agencies there to deliver results. Perspective is needed, because not so long ago, ARMA and the other anti-corruption agencies didn’t even exist in Ukraine.

As I said, international support will be critical. EUAM is already in close contact with ARMA’s leadership and we have agreed on a range of support activities over the months ahead. EUAM observed the selection process of the Head of ARMA, Mr Anton Yanchuk, and we will soon be providing support in areas such as human resources, network building, and strategic communications.

Everybody wants the same end result – a reduction in corruption and an increase in prosperity, for all Ukrainians. To that end, the establishment of ARMA is a small but significant victory on Ukraine’s journey of reform.

ARMA is small but significant piece of Ukraine’s anti-corruption jigsaw is licensed under a Creative Commons Attribution-Share Alike 4.0 License.