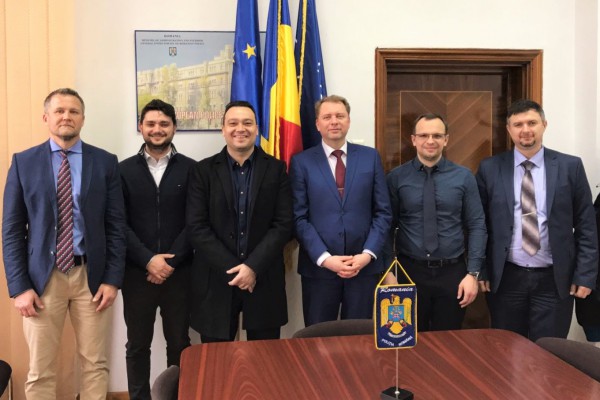 From 6-10 March 2017, the Head and Deputy Head of the IT Department of the National Police of Ukraine took part in a five-day study visit to Romania, financed by the EU Advisory Mission Ukraine (EUAM). The purpose of the visit was to see how IT capabilities can be used for criminal and intelligence analysis. EUAM is supporting the National Police of Ukraine in the development of an Intelligence-Led Policing (ILP) approach, which is aimed at modernising investigations of criminal activity in Ukraine.


EUAM, Romanian police and National Police of Ukraine experts during the study tour to Romania

“Romania was chosen as the destination for the study trip because 12 years ago, Romania was in a very similar situation to Ukraine in terms of a lack of Intelligence-Led Policing and criminal analysis capabilities,” said Fabian Loewenberg, EUAM Head of Rule of Law Component. “The way in which Romania has adopted current best practices serves as a very good example for Ukraine.”

The study trip complements other assistance that EUAM has offered the National Police of Ukraine, particularly in cooperation with the Romanian police. EUAM and the Romanian Police are working together with their Ukrainian colleagues to develop a long-term strategy in ILP.

Top IT managers from National Police of Ukraine visit Romania to support development of Intelligence-Led Policing is licensed under a Creative Commons Attribution-Share Alike 4.0 License.