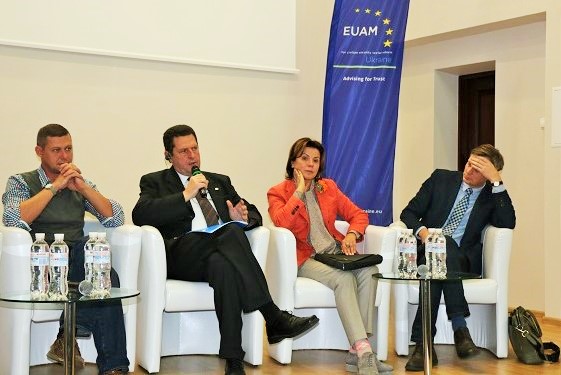 In Kyiv yesterday, the EU Advisory Mission Ukraine (EUAM) co-organised two major events related to freedom of assembly. The first was a conference – ‘A Milestone Anniversary: 25 Years with no Law on the Freedom of Assembly’ – to discuss two draft laws that are currently being debated in the Ukrainian Parliament on freedom of peaceful assembly, organised with USAID and the Ukrainian Centre for Independent Political Research (UICPR). The second was a training session for police officers on policing assemblies from a human rights perspective, organised with the Organization for Security and Cooperation in Europe’s (OSCE’s) Office for Democratic Institutions and Human Rights (ODIHR).

EUAM Head of Operations Udo Moeller speaking at the conference alongside (from left to right) Mykhailo Chaplyga, Representative of the Ombudsman of Ukraine, Maryna Stavniichuk, NGO “For Democracy through Law” and Roman Romanov, International Renaissance Foundation

The right to assemble is a cornerstone of democracy, but to ensure that demonstrations and other mass gatherings take place peacefully, democratic countries have legislation in place to protect human rights and maintain public order. Ukraine’s existing legal framework on freedom of public assembly is based on Article 39 of the Ukrainian constitution and international treaties, but there is no specific law regulating the issue. This creates a legal gap, which allowed for example courts to use legislation from the Soviet era to ban demonstrations during the Euromaidan protests.

Drawing up a legal framework for freedom of assembly that both respects the right to assemble peacefully and at the same time prevents violence from breaking out is a delicate balance. There were two panel discussions at the conference involving Ukrainian members of parliament involved in drafting the laws and leading representatives of Ukrainian civil society as well as international experts and advisers. Invitees in the audience from civil society also gave their view on the current legislation, with some arguing forcefully that no new legislation is required.

EUAM Head of Mission Kęstutis Lančinskas stressed the need for effective legislation, asking the audience, “What kind of limits can we envisage that respect democratic rights? Can alcohol be sold near demonstrations? Can people with a licence to bear arms carry them at demonstrations? These sorts of questions are why a legal framework is so necessary.”

Peaceful assembly legislation the subject of lively debate at Kyiv conference is licensed under a Creative Commons Attribution-Share Alike 4.0 License.