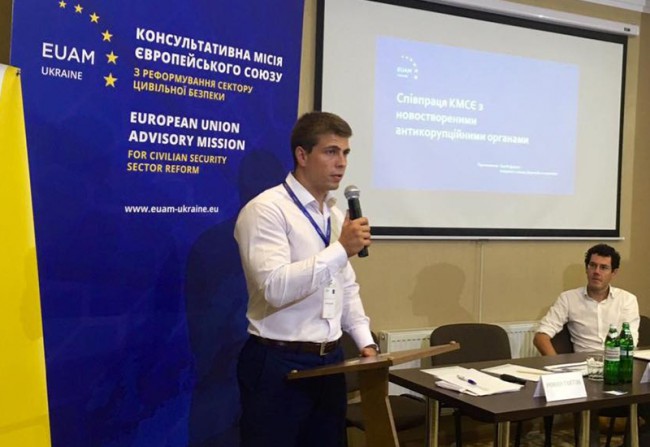 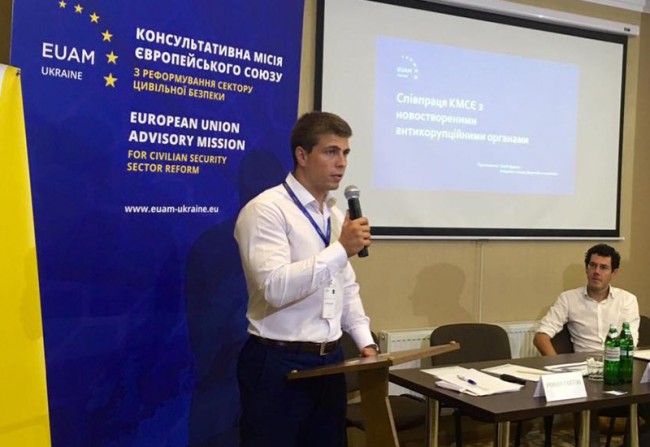 Next Friday, 9 December, is International Anti-Corruption Day. Sergei Derkach, EUAM Anti-Corruption Officer, gives his thoughts on where Ukraine stands in its battle against corruption.

There has been a huge focus, both nationally and internationally, on Ukraine’s corruption problems. Has the country made any real progress in the fight against corruption since the Maidan Revolution of Dignity?

Corruption remains one of Ukraine’s greatest problems. I think it is fair to say that it was one of the main triggers for demonstrations that led to the Revolution of Dignity at the end of 2013. The Transparency International Corruption Perception Index shows that Ukrainians consider it the country’s main challenge. Recent studies also indicate that an estimated 38% of Ukrainians have given a bribe in the past year – so it is a huge problem. It is endemic to the point that people feel that it is a necessary condition for survival in Ukraine. Having said that, there has been substantial progress over the past couple of years. However, much of the progress so far has involved legislative measures that are not obvious to the average person on the street. Ukrainian anti-corruption legislation now compares favourably with EU standards, although there are still legislative gaps to fill. The new legislation has led to the creation of dedicated anti-corruption agencies that didn’t exist previously. The National Anti-Corruption Bureau of Ukraine (NABU), for example, has managed to get up and running in a relatively short period of time. There are 40 cases investigated by NABU that are now in court. So that is definite, measurable progress. The Special Anti-Corruption Prosecutor’s Office has also been established to prosecute cases investigated by NABU, while the National Agency for the Prevention of Corruption (NAPC) successfully launched the e-declarations system whereby high-level officials have declared their assets.

The Ukrainian population in general seem to carry a pessimism toward the fight against corruption. Many people believe corruption to be a cultural phenomenon that will never be defeated. Is the struggle doomed to failure?

There is no question that there was a window of opportunity to tackle corruption after the Maidan Revolution, but there is also no doubt that people are losing patience. People’s pessimism is understandable because despite some progress, there is a lack of actual verdicts and people being brought to justice. People need to see these results in their daily lives. At the same time, I do not think the fight against corruption is doomed to failure. Although zero corruption is never possible, it should be possible to reduce it enough so that people enjoy a basic standard of living and develop a basic trust of those in government. Corruption is not cultural – it is the result of specific economic circumstances, and the breakdown of democratic processes. Ukraine has a complex history, and it has had a difficult first 25 years of independence. But on the bright side, it also has brilliant and ambitious young population, so there is certainly hope for the future. Corruption has become inherent in people’s daily business, and breaking that pattern is going to take time. One of the great misfortunes of corruption is that it becomes far too easy to blame others, to blame politicians, to blame society. But people must also try to take individual responsibility and set an example in their own lives, no matter how futile that might seem. Certainly, politicians need to show a positive example, to play a leading role because they have been elected to serve the people. But every person can set an example – it works from the bottom up as well as visa versa. If we don’t give a bribe, and don’t take a bribe, then we create a collective example that will make it harder for high-level corruption to thrive.

Where do we stand today, what would you say are the immediate challenges going forward?

For the Ukrainian people, the ultimate proof of progress in fighting corruption would be the prosecution and jailing of corrupt officials. But unfortunately, nobody has yet gone to prison. For that to happen there needs to be a comprehensive approach – all of the various tools to fight corruption, including the new agencies, need to work in harmony towards a common end. One of the missing pieces in the puzzle is an anti-corruption court, independent and operating without political interference, that would judge the cases investigated by NABU. The creation of a separate anti-corruption court, however, would require additional legislation, and therefore more time. In the meantime, there is enough legislation already passed to allow the cases now in court to proceed – all that is needed is political will to make sure judges are in place to do their job. The NAPC managed to overcome technical stumbling blocks and finally launched the e-declaration system, and we understand that over 100,000 officials did declare their assets by the 31 October deadline. That is an excellent outcome and a step in the right direction, but the process of verifying the declarations will require significant resources. Ukraine has also created the State Bureau of Investigation (SBI). The Bureau is due to start operating on 1 March 2017, but it still does not have a director appointed, nor other core staff.

Why the need for all these new agencies?

I think for genuine reform to take place, a fresh start was needed – understandably, Ukrainians didn’t have any trust in the old government agencies, so new institutions had to be created. These new institutions, with new staff and an independent mandate, have a better chance of winning public trust. To give you a quick overview of the main anti-corruption agencies and what they do: NABU investigates cases of high-level corruption in state bodies; SAPO oversees all of NABU’s cases and takes them to court (as prosecutors); the NAPC manages the e-declaration system and monitors the financing of political parties; the SBI is tasked with investigation of lower-level public-service corruption cases; the Asset Recovery Management Agency is also yet to be established.

Many people believe that the anti-corruption legislation introduced by Ukraine is excellent. So why is it not working? Isn’t it strong enough?

The legislation already passed by Ukraine is excellent, but the legislation continually faces threats from parties seeking to roll back on the progress. So Ukraine is faced with the twin challenge of having to protect the legislation already introduced, and fill some remaining legislative gaps. Then, the country needs more time for the various institutions to start functioning properly. While people’s frustrations are understandable, expectations should also be realistic. You must remember that, for example in transition countries such as Poland and Lithuania, it took over 10 years for anti-corruption agencies there to deliver results.

What has EUAM been up to in this regard and what are EUAM’s priorities in anti-corruption over the coming months?

The Mission has been very active with Ukraine’s new anti-corruption agencies in 2016. For NABU, for instance, EUAM funded a refurbishment of its interview rooms over the summer of 2016. We also facilitated formal contact or cooperation agreements between NABU and the anti-corruption agencies of Poland, Lithuania and Romania, as well as Europol and Eurojust – it is vital for NABU to be able to receive knowledge from EU agencies that have gone through a similar process of reform. EUAM helped to develop the NABU Code of Ethics, including the creation of an online training tool. EUAM also carried out an outreach awareness campaign for NABU over recent months – this including the production of a short video that has already been viewed one million times on social media. This last point is important, because proper communication with the general public is needed to inform people what exactly the anti-corruption agencies are doing, which in turn will help to ensure that expectations are realistic. NABU tells us that only 7% of calls it receives from the general public are actually related to NABU’s area of competence. Looking ahead, EUAM will be extending the existing support we provide to NABU and the other anti-corruption agencies in Ukraine. The creation of the SBI, Asset Recovery Management Agency, and possibly the anti-corruption court, will require further support. The Mission will also be working closely with the EU DANIDA project, which will start work in early 2017. The DANIDA project is an additional tool of the EU to support all of Ukraine’s anti-corruption agencies, and its personnel will work alongside EUAM anti-corruption experts.