Over summer 2016 and continuing until the end of the year, the EU Advisory Mission Ukraine (EUAM) has been carrying out a major training programme in community policing for Ukrainian police officers. When fully completed 2017, the training course will have taken place in all of Ukraine’s urban centres. The training sessions are two weeks long and as part of the programme, Sari Rautarinta, Human Rights Adviser and Trainer and Oleksandra Zub, Human Rights Training Officer, have been delivering half-day sessions on Human Rights and Gender.

In this interview, Sari, who is a police officer in the Finnish police, and Oleksandra Zub, an experienced human rights expert from Ukraine, argue that protection of human rights is the basic duty of a police officer. Sari is emphatic about the fact that she is not a ‘flower hat lady’ sent to lecture on abstract concepts, but a police officer with many years of experience who is thus able to relate to the needs of the course participants – Ukrainian police officers. The discussion of practical problems that police officers face on a day-to-day basis is therefore the central component of the training.


What role do human rights play in police work?

We start our training session by asking the groups to tell us which human rights they cherish the most. You get the responses you would expect from any group of people, for example the right to life, the right to freedom of speech, freedom of assembly, the right to an education etc.

Then we ask them which rights are absolute. Almost always, a majority response is the right to life. But the thing is that every serving policing police officer, i.e. everyone in that training room apart from Oleksandra, has the right to take a human life in extreme situations in accordance with national and international laws.

So there are no absolute rights?

Sari: There are two. The right to be free of torture, degrading and inhuman treatment and the absolute abolition of slavery. These are inviolable under all circumstances. All other rights can be limited under circumstances laid out by the law.

Oleksandra: The basic element of the course is an explanation of human rights legislation in Ukraine. This leads to some interesting discussions about what is allowed and what isn’t. If you have a citizen who attacks you for example, how much force is allowed to restrain them? What is the difference between restraining a member of the public legally and torture? We try to make the sessions as participative as possible – the principle is student-centred learning. No-one likes being lectured to for a whole day.

What has been the response of participants?

International advisers have a reputation for coming and giving very theoretical presentations, but I’m not just a ‘flower hat lady’, I’m a police officer with over 20 years’ experience and a Master’s degree in International Human Rights Law. The participants respond well to that, because I talk to them in their terms.

What does a gender perspective mean in practical terms?

Sari: Well, let’s start with what a gender perspective is not. Sometimes we hear that it is better if female police officers give tickets or break up fights between men because women are better in these situations. But not all men have bad interpersonal or negotiation skills and not all women are natural communicators. When I was a young police officer, some of the older guys would say to me, “we’ve had a report of a domestic violence incident, you go and sort it out.” But often, if a man is abusing his wife, the last thing he wants to see is another woman on the scene.

A gender perspective means an awareness of how gender impacts on our decisions and interactions, including our prejudices. A sexual assault case should start from the standpoint of ‘was the law broken’, not ‘what was the victim wearing, was alcohol involved etc.’ We try to get participants in a course to see through any prejudices they may have and get them to analyse situations based on the law and only the law.

Oleksandra: A gender and human rights perspective is about opening eyes to difference. Sari mentioned the gender perspective, so I will mention some other perspectives. In the classes, the subject of minorities has come up for example. You hear police officers ask themselves whether they know anyone from particular minorities among their colleagues. It is these kind of discussions – this kind of acknowledgement that we live in a diverse society that these trainings are designed to promote.

What have you enjoyed most about the training?

Oleksandra: Definitely the interactions with participants. It has been really interesting to talk through different perspectives.

I have a story I tell about my first day on the job in Finland, when an older colleague came to me and said, “Forget all you learnt in your training, I’ll show you how it’s really done”. Everyone laughs and it is clear that this is an experience these new police officers relate to. But in fact, older police officers may not know everything – the most important thing is a knowledge of the law, including human rights provisions, and then enough practice implementing that knowledge. And to have the courage to have a humane heart. We are here to help with this process. 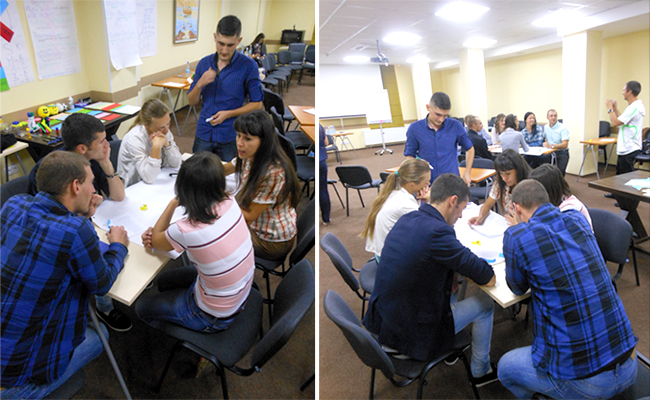