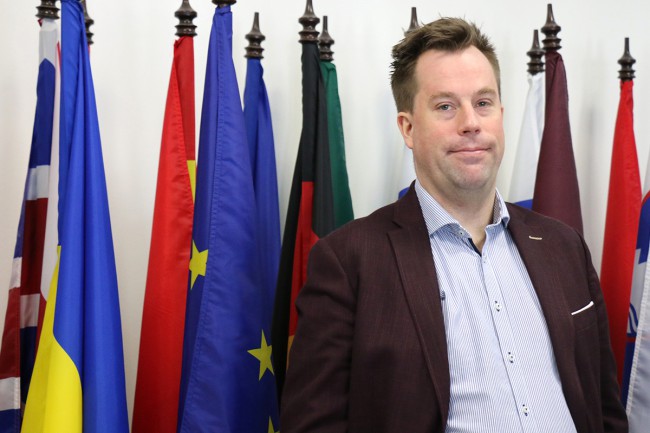 On 10 December 1948, the United Nations adopted the Universal Declaration of Human Rights, which is now commemorated as Human Rights Day every year.

The EU Advisory Mission (EUAM) works closely with law enforcement and rule of law institutions in Ukraine to enhance human rights protection in Ukraine. To mark Human Rights Day, a short video interview with Ukrainian police officers was created as well as an interview on human rights  with EUAM Human Rights and Minorities Adviser Ola Quarnstrom. 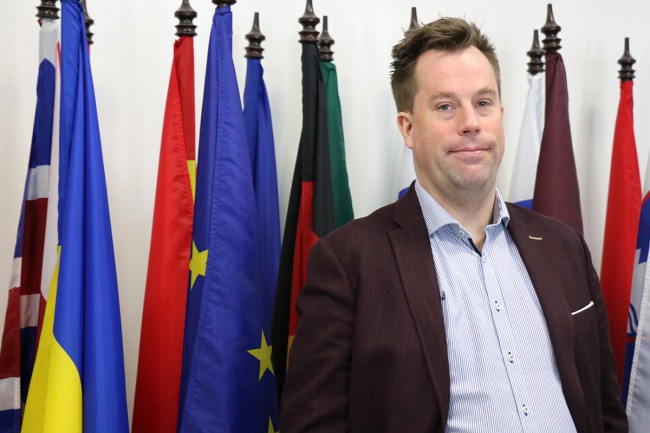 The past three years have seen a great deal of reforms in Ukraine. How would you evaluate these from a human rights perspective?

I would say that human rights reform in Ukraine started in earnest a year ago. This was when the National Strategy on Human Rights was adopted as well as the Human Rights Action Plan. In the past year, there have also been welcome constitutional amendments, which enhance the human rights framework.

The Action Plan is an ambitious document running over 200 pages, which foresees reform in every sector – including economic and social rights, penitentiary reform, domestic violence, rights of IDPs etc. When we think about human rights, we often think in terms of the most shocking violations – torture or arbitrary detention, but there are many other categories of human rights violations, and it is positive that the government has made provisions to respect and protect a broad range of rights via the Action Plan.

As, I said, it is an ambitious agenda and the government has not been able to achieve all of its objectives. Often there is a lack of ownership over key reforms, which means that changes are not happening within the expected timeframes. Also, there is a general feeling in the international community, which I share, that the Action Plan hasn’t been adequately budgeted for. This is a shame, because the government has set the right priorities, but a lack of financing might prevent the Action Plan from having the desired effect. Overall however, Ukraine is taking steps in the right direction.

What have been the most positive reforms in the past year?

The past year has seen a lot of important reforms. In penitentiary services there has been some progress. New draft legislation provides for penitentiary judges, which – if adopted and implemented correctly – will give prisoners recourse to justice if they feel their rights are violated.

In terms of police, the setting up of the Human Rights Directorate is an important step, which should help to promote a culture of human rights within the institution. The National Police has rightly also received praise for its handling of large demonstrations such as the Equality March in June or the religious procession in July. There has been a greater focus on fighting domestic violence, which is long overdue.

What we are seeing is that a lot of effort is being made by law enforcement and rule of law institutions in seeing citizens as people with rights and not problems to be dealt with. That is the most positive change of all.

What are the main challenges from a human rights perspective?

One of the main challenges in Ukraine is a lack of institutional capacity. Ukraine often fails to satisfy relevant human rights standards because the wheels of justice turn too slowly. Human rights are violated because civil judgements are not executed in time or it takes too long for a trial to take place.

There is also the conflict and the economic crisis, which means that the government has many competing priorities. What I would say however, is that human rights should always be respected and protected irrespective of the situation. In fact, I believe that one of the factors behind the Revolution of Dignity three years ago was a lack of respect for human rights.

How has EUAM assisted with the reform process in human rights?

We have provided strategic advice for the Action Plan and we are named as implementing partners in a number of sectors in the Plan. This means that the government can approach us and ask for assistance in these areas, which we are happy to deliver when asked.

Alongside the Action Plan, we also provide advice on draft legislation and secondary legislation, for example regarding public order and penitentiary reform. We provide training, about which we have had very good feedback. Our human rights trainers have been closely involved in the nationwide roll out of community policing training for police officers, helping provide police officers with the necessary knowledge in international and national human rights legislation so they can carry out their tasks in accordance with the law. We are active providing human rights modules as part of public order training for the police as well.

What is the significance of Human Rights Day?

Of course, human rights should be respected every day. But it is good to have a day to reflect on how the human rights situation can be improved. As well as preventing abuses, the attitude to addressing existing problems to make sure they are not repeated is crucial. This year, the theme of Human Rights Day is ‘Stand up for someone’s rights today’. I think this is particularly relevant to Ukraine, because of the strength of civil society here. If you see an injustice take place, do not be silent, but stand up, speak out, report violations.

What would you like to see by Human Rights Day 2017?

I would like to be sitting in a Kyiv café in a year’s time reading about the achievements Ukraine has made since 2016. It would be good to read that the legal framework on freedom of assembly has been reformed and that the Soviet-era regulation governing public assembly has been confined to the past. I hope to see a national strategy for minorities and the role of the Human Rights Directorate in the police enhanced. I would like to see judgements from the European Court of Human Rights implemented faster. And finally, I would love to see an increased commitment to the Human Rights Action Plan. As I mentioned, it is an ambitious document, which is much needed, but I would like to see greater resources allocated to it.