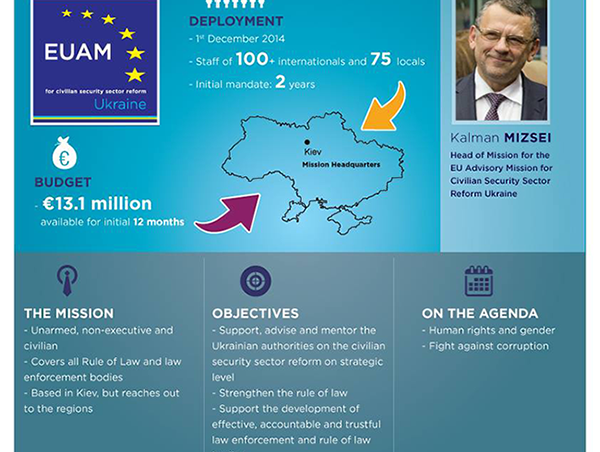 EUAM Ukraine has been established by EU Council decision on 22 July 2014 at the request of the Ukrainian authorities.

All mission action is taken under full local ownership and in coordination with EU Member States and other international players so as to ensure coherence of the action of the international community in support of Ukraine authorities.

The planning phase ended on 15 September.

The mission foresees its initial operational capability and launch for 1 December.

The SOMA (Status of Mission Agreement) was signed on 17 November between the EU and Ukraine.

Nature and scope of the mission:

EUAM Ukraine is a non-executive, unarmed, civilian mission supporting, advising and mentoring the relevant Ukrainian actors on the civilian security sector reform at a strategic level.

The EUAM action covers all Rule of Law (including public prosecution and courts) and law enforcement bodies, excluding the defence sector; however, close coordination with this particular process will be important to ensure unity of efforts and coherence.

The promotion and protection of Human Rights and Gender equality is fully integrated into all aspects of strategic and operational planning.

The mission is based in Kyiv, but reaches out to the regions. The mission intends to co-locate its advisors in the Ukrainian ministries and agencies to support the employment relationship in the best possible way.

The mission’s initial mandate is foreseen for two years. Careful sequencing and adjustment of the implementation to a highly dynamic context is necessary based on continuous analysis and strictly defined mandate by EU Member States. After one year a strategic review will analyse the progress of the reform against clear baselines.

The civilian CSDP Mission is a short- to medium-term initiative, whereas civilian security sector reform is a long lasting project. The mission’s results will most likely have limited visibility in the short term.

The EU has a comprehensive approach to Ukraine: the mission’s contribution made by the mission complements is fully coordinated with the EU’s other external action tools, in particular the EUs political engagement, financial assistance, existing support to civilian SSR by EU instruments and agencies, the activities of the EU Delegation in Kyiv, the Ukraine Support Group and other key international actors and will seek to avoid any duplication. These instruments form a sustainability perspective for EUAM’s achievements. 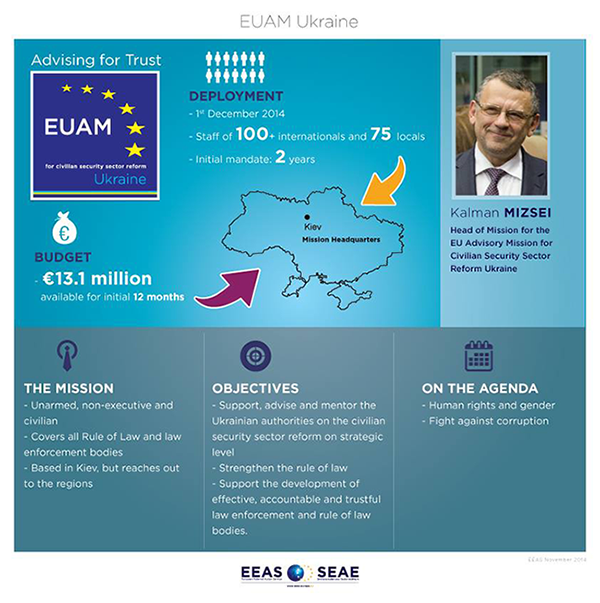