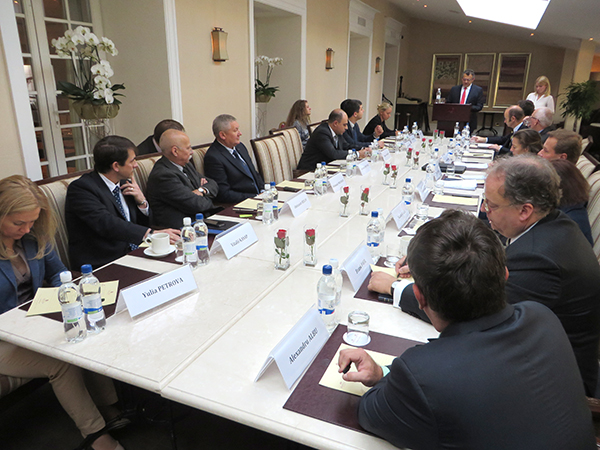 On invitation of Head of Mission Kálmán Miszei, the Deputy Minister of Internal Affair, the Director of the Ministry of Foreign Affairs General Directorate for the EU and senior representatives from the National Security and Defense Council, the General Prosecution Office, the Security Service of Ukraine, State Border Guard and National Guard attended an information meeting on the current state of the advisory mission.

The purpose of the meeting was to inform the Ukrainian authorities about the objectives of the mission and the optimal working relations.

“We clearly understand the enormous security challenges you face in the East. We also understand the very strong and significant public demand for change in the civilian Security Sector; if this is not addressed with urgent and credible progress toward SSR another challenging situation could well develop. Helping you to address this challenge is the mission purpose”, said Kálmán Miszei in his opening speech.

The European civilian security reform has now come to a crucial moment in the task planning and the development of adequate modus operandi.

The EUAM Head also underlined that a strong message needs to be delivered to the public regarding the nature and implementation of the security sector reform. Public belief in and understanding of the commitment is vital.

He emphasized the local ownership principle, the mission’s task being dedicated to advising and mentoring.

To be fully effective in support of the mission’s Ukrainian partners, Miszei asked them to open the doors of the Ministries and Agencies so that the EU advisers can colocate with their counterparts and so engage at the highest political and operational levels. This procedure includes a central body empowered to design and drive the civilian security sector reform process.

The meeting, which marked the beginning of a very promising cooperation, took place in a very collegial and open state of mind.