CivCom visit: What EUAM‬ can do for Ukraine – a dialogue between the Member States representatives and the Ukrainian Authorities 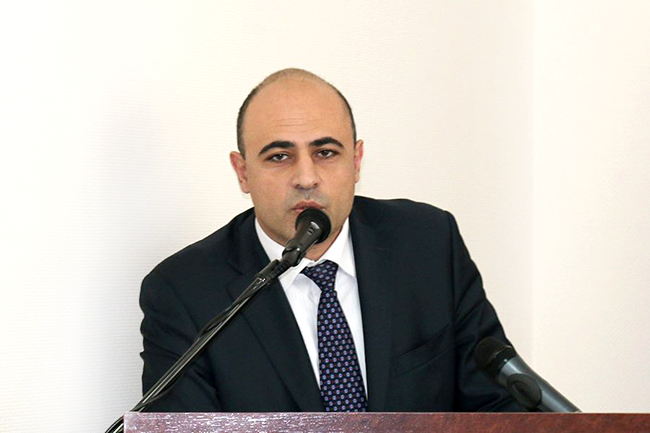 Representatives of the EUAM relevant counterparts have engaged a vivid dialogue with the members of the Committee for Civilian Aspects of Crisis Management. The discussion revolved around EUAM’s potential support to the civilian security sector reform in particular and on the Ukrainian reform process in general.

Deputy Minister of Internal Affairs Tigran Avaykan emphasized the leading role of his Ministry, mentioning the Kyiv police patrol project to be rolled out next month.

Demilitarisation of the civilian law enforcement structures, delineation of structures and functions and new draft laws including Police preside over these initiatives partly undertaken in cooperation with EUAM.

‘I welcome the idea of extending the EUAM mandate and I also express my hope for further technical reform support from the EU side’, concluded Mr Avaykan.

Maksym Palamarchuck from the National Security and Defense Council considers that the reform of the security sector must respond primarily to Rule of Law and Human Rights considerations.

According to him, there are a few priorities to be acknowledged while establishing efficient military and law enforcement agencies in Ukraine:

The fight against terrorism and propaganda, the establishment of an effective patrol police, which is in daily contact with the citizen and the decentralization issue in regards to law enforcement and rule of law structures, mainly when it comes to the conflict region and the conflict prevention in other oblasts.

Tetiana Totska from the General Prosecutor’s Office reminded the audience that the law on prosecution, which is praised by the Venice Commission because it respects all relevant Rule of Law and Human Rights principles, is adopted. The entry in force had however to be postponed to July as a number of human resources questions need to be solved.

‘It is about ensuring full staffing support’, says Ms Totska. The structures have to downsize from 18.000 to 15.000 staff.

Right now, further preparatory measures on delineation of competences and duties and on self-governance are taken.

One of the major challenges is the setup of the local prosecutorial offices, both from the logistical and the organizational point of view.

Vitalii Baiev, who is the Deputy Director of the Coordination Center of Delivery of Legal Aid, represented the Ministry of Justice. The Ukrainian Justice Authorities are willing to grant free legal service to certain categories of citizens all over Ukraine. The process will be carried out on the central level and by the Ministry’s 25 regional offices.

The beneficiaries are detained people on suspicion, ATO participants and the internally displaced persons.

It is up to the Centre of Legal Support to assign a lawyer to the legitimate recipient and though guarantee the independency of defense.

Konstyantyn Krasovsky, the Secretary of the Council for Judicial reform, representing the Presidential Administration, has filed report on the state of play of the judicial reform. The reform strategy has been drafted and the law on fair trial is adopted.

The working group on judicial reform inside the constitutional reform commission deals these days with the status of the judge. EUAM is involved in both files together with other European and international actors.

Mr Krasovsky appealed for more coordination on the donor side and asked EUAM to play an important role during the upcoming implementation phase of the laws and strategies, on all levels. Further on the Secretary of the Council for Judicial Reforms, invited EUAM to use Ukraine’s intellectual powers at best, a suggestion that is already being transposed through EUAM’s very successful hiring of competent local staff.

Olha Posadska, Head of Division of the Directorate General for the EU in the Ministry of Foreign Affairs, raised the general Ukrainian request for EU support in the Minsk implementation.

‘EUAM can make a difference’, she said, while reiterating the request for the deployment of a CSDP mission in the Donbas. She suggested, while waiting for the EU decision, to strengthen EUAM.

According to her, the mission should also play a role in the implementation of the local elections.

It is about protecting the citizen, his or her human rights and help restoring Rule of Law and law enforcement, also in the conflict adjacent regions, she said.

CivCom visit: What EUAM‬ can do for Ukraine – a dialogue between the Member States representatives and the Ukrainian Authorities is licensed under a Creative Commons Attribution-Share Alike 4.0 License.