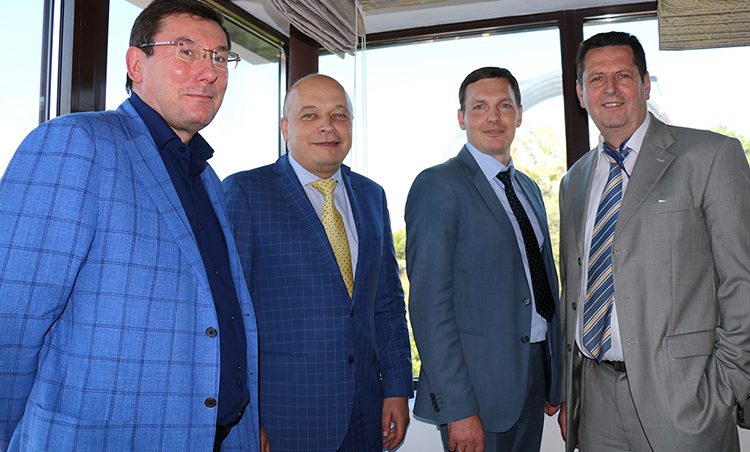 During comprehensive discussions held last Friday evening, the General Prosecutor of Ukraine, Yuri Lutsenko, assured the Head of the Delegation of the European Union to Ukraine, Hugues Mingarelli, and the Head of the EU Advisory Mission (EUAM), Kestutis Lančinskas, that much-needed reform of Ukraine’s prosecution system would continue, in close cooperation with EUAM.

“I think that we now have a clearer vision for the way ahead,” said Mr Lutsenko. “We have agreed that at our next meeting, we will conclude a roadmap for reform with EUAM support, and what steps need to be taken.”

Looking ahead, all parties agreed that the support of the international community would be critical. In this context, enhanced communication between EUAM and the prosecutor’s office would make the path to reform smoother. Mr Lančinskas and Mr Mingarelli complimented Mr Lutsenko for achievements made, such as the introduction of a pay-bonus system for prosecutors, the introduction of an integrity-checks regulation, and the impending introduction of a performance evaluation system. In order to build on that, they noted that the launch later this year of an EU Rule of Law project (PRAVO) might represent an opportunity for the GPO to accelerate prosecutorial reforms.

For its part, the EU – through EUAM, and the Justice Reform Support project – has provided support to prosecution reform in several areas. EUAM has observed the selection of local prosecutors, launched the pilot ‘merger’ project to improve cooperation between police and prosecutors, and delivered training in prevention and prosecution of illicit enrichment and e-case management. Given the Mission’s belief that the prosecutorial system must be seen by the public to be autonomous, accountable, efficient and effective, just last week EUAM also carried out training in strategic communications for 40 prosecutors, aimed at improving public-communication skills.

General Prosecutor and EU leaders agree way ahead for prosecution reform at EUAM headquarters is licensed under a Creative Commons Attribution-Share Alike 4.0 License.