EUAM Head of Mission: Ukraine is now ‘a better place for women and girls’ 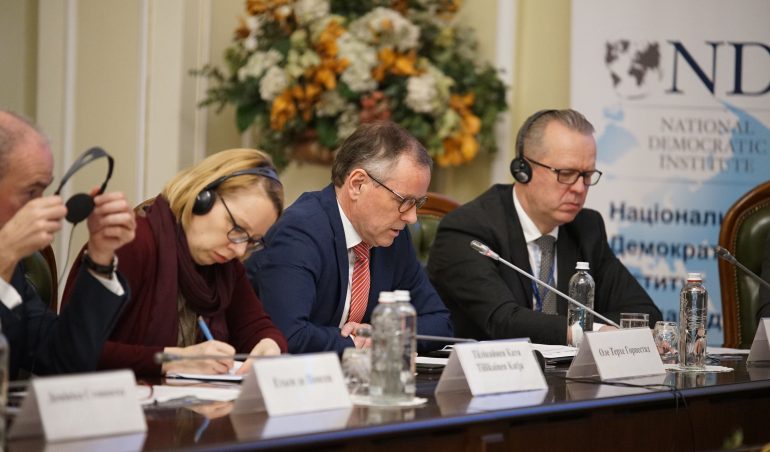 During a roundtable on ‘Gender Equality: Monitoring the Implementation of the UN Convention on the Elimination of All Forms of Discrimination against Women (CEDAW) and the Beijing Declaration and Platform for Action’ this week, the EUAM Head of Mission Antti Hartikainen commended the Ukrainian government on its progress in gender mainstreaming. He noted, in particular, Ukraine’s appointment of a Government Commissioner for Gender Equality, and a Deputy Minister at the Ministry of Internal Affairs on Gender Equality and Human Rights.

“Appointments like these are an important shift towards institutionalizing gender mainstreaming in the national machinery,” said Mr Hartikainen. “Ukraine has become a better place for women and girls in many important aspects. That being said, we also know that we still have a lot of work ahead of us to reach gender equality. Allow me to congratulate Ukraine on the many important steps that have already been taken in this regard, not the least the appointment of the Commissioner for Gender Equality and the adoption of the Law on Domestic Violence.”

Mr Hartikainen shared EU best practices in gender mainstreaming, and addressed the gaps previously identified by the CEDAW committee, including the prioritizing gender mainstreaming as a strategy. Other issues discussed at the roundtable were how to most effectively implement the legislation on domestic violence, and increase law enforcement’s response to domestic violence, as well as how to increase women’s active participation in politics. In 2019, Ukraine elected a parliament with 20% female representation (up from 12%) – a significant improvement but still lagging behind other democratic societies.

The roundtable was opened by the Head of the Committee on Foreign Policy, Mr Oleksandr Merezhko, and led by Marina Bardina, member of parliament and expert on gender equality. Other included actors from civil society, Ministry of Internal Affairs, Ministry of Social Policy, the Commissioner for Gender Equality, and the ambassadors of France and Norway.

EUAM Head of Mission: Ukraine is now ‘a better place for women and girls’ is licensed under a Creative Commons Attribution-Share Alike 4.0 License.