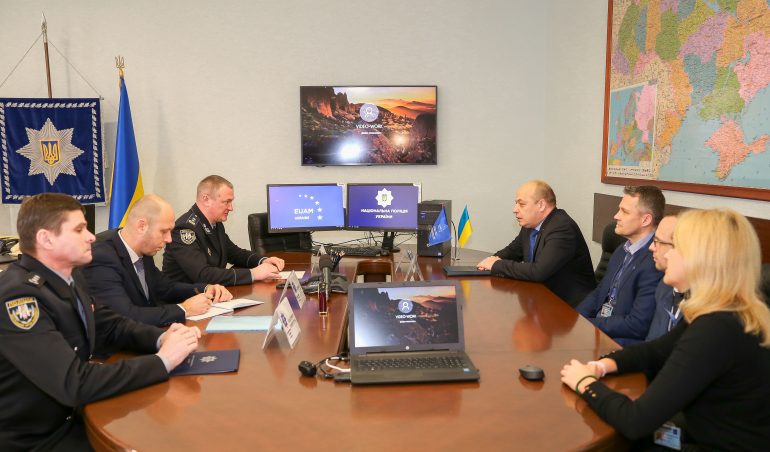 Two donations made by the EU Advisory Mission (EUAM) Ukraine this week are aimed at strengthening the capacity of police units investigating serious crimes.

The first donation, made to the Cyber-Police Department of the National Police of Ukraine (NPU), supports EUAM’s work in assisting the Ukrainian police integrate with international databases that share information on sexual offences against children.

In particular, the donated equipment will help the NPU access the International Child Sexual Exploitation Database (ICSE Database) of the General Secretariat of Interpol via encryption. This database uses sophisticated image and video comparison software to make connections between victims, abusers and places. In July 2017, EUAM facilitated training for three police officers in the Cyber-Police Department of the National Police in how to use information from the ICSE Database.

The second donation was made to the NPU’s Criminal Analysis Department and the Department Combatting Drug-Related Crimes and forms part of EUAM’s commitment to assisting the NPU adopt intelligence-led policing approaches. EUAM has played a key role in introducing Intelligence-led policing approaches, which at its core is a way of ensuring that information received by the police is used effectively and is also shared efficiently between different police departments. To this end, EUAM has organised extensive training and study tours for the NPU to familiarise Ukrainian police officers with EU best practices in this field.

“We’re pleased to see the progress that has been made by our colleagues in the NPU towards adopting an Intelligence-led policing approach such as those that are widespread in Europe,” said Zbynek Vanicek Lead Adviser on Criminal Investigations. “We’re also proud to be supporting the cybercrime department as they deal with some of the most horrific offences, such as sexual abuse of children”.

The total number of items donated this week to the NPU to support criminal investigations units is 19 workstations, 38 monitors, one printer, one interactive board, and one Cisco Firewall.