A joint seminar was organised this week in Kharkiv by the EU Advisory Mission (EUAM) Ukraine and the OSCE Office for Democratic Institution and Human Rights (ODIHR) to support the National Police of Ukraine in their efforts to respond to sexual and gender-based violence. MoIA Academy teachers, criminal investigators, social workers and experts on gender-based violence were in attendance. 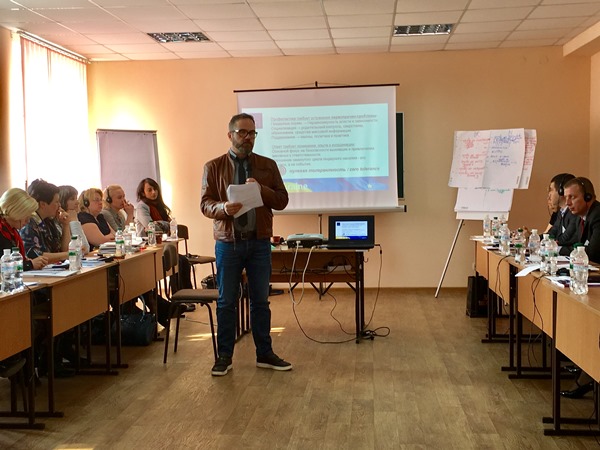 According to statistics provided by the NGO La Strada, which participated in the seminar, more than 10% of Ukrainian prosecutors, 11% of judges, and 12% of representatives of the police consider that in certain cases it is acceptable to apply force or beat a partner. Moreover, 39% of Ukrainians believe that domestic violence is a private matter that should not require the involvement of law enforcement or justice.

“A major challenge is the lack of legislation and procedural guidelines, but awareness and understanding from the part of law enforcement are also needed to improve the situation,” said Soren Sonderstrup, EUAM Gender Adviser. “Signing the Istanbul Convention and introducing bylaws that would introduce criminal liability for domestic violence will be important, but the relevant authorities should also understand that they play a role in increasing general public awareness and filling the vacuum left by a lack of legislation and procedural guidelines.”

The seminar presented an opportunity to debate how law enforcement agencies together with social agencies, health authorities, prosecution and the courts can coordinate and corporate better to achieve better services for victims of violence and trafficking.

The Kharkiv seminar follows on from a similar seminar organised in Odesa in December 2016. EUAM and its partners will continue to push for greater understanding and awareness of gender based violence in Ukraine and the need for sensitive approaches that place a greater focus on the rights and concerns of victims.

Ukrainian police receives support to step up its response to sexual and gender-based violence is licensed under a Creative Commons Attribution-Share Alike 4.0 License.