EUAM opens its doors to the public for Europe Day In celebration of Europe Day, which is celebrated in Ukraine on the third Saturday of May, the EU Advisory Mission opened its doors to the public and joined forces with its Ukrainian law enforcement partners to entertain guests with activities and music as well as explain the Mission’s cooperation with the Ukrainian authorities to achieve sustainable law enforcement and rule of law reform.

“I believe this kind of event is useful because it provides an opportunity to show what the EU is about and what the EU is doing to assist the transition process in Ukraine. We have to explain how coming closer to the EU brings concrete benefits. The EU Advisory Mission is one of the main pillars of the EU presence and activities in Ukraine,” said Hugues Mingarelli, the Head of the EU Delegation to Ukraine. “The reform of the civilian security sector is something that Ukrainians citizens are expecting strongly. We all know there is a strong need to break the Soviet legacy of an almighty state apparatus and instead have new institutions that serve the interests of the people,” the EU Ambassador continued.

This is the second year that EUAM has organised an Open Doors event for Europe Day. As well as speaking to EUAM’s staff, guests were able to witness a demonstration of the talents of the sniffer dogs of the State Border Guard Service of Ukraine, listen to the orchestra and drummers of the Ministry of Internal Affairs Academy, meet patrol police officers who were helping children find out more about road safety and talk to dialogue police officers about Ukraine’s new methods for managing mass events.

EUAM’s Deputy Head of Mission Fredrik Wesslau paid tribute to Ukraine’s courage for its European choice in the face of tremendous challenges and underlined the value of the European project for the whole continent. “The past couple of years have been challenging for the EU but they have also reminded us all across Europe of why the European Union is unique, precious, and worth protecting. No one knows this better than Ukrainians,” he said. “EUAM is strongly committed to promoting civilian security sector reform”.

The Deputy Head of the National Police of Ukraine declared, “The Ukrainian people have made a civilizational choice and the foundation of that choice is to adopt values that bring us closer to the European community. Among these values are respect for human rights, prosperity and the wellbeing of citizens. We realise that we face significant challenges, which we need to overcome to reach our goals, but thanks to the support we have received from the EU Advisory Mission and the EU Delegation, we can now demonstrate things we are proud of and demonstrate positive achievements for the Ukrainian people”.

Amid the celebrations, it was not forgotten that 18 May is a day of mourning for the Crimean Tatar community and a minute of silence was held at 12.00 in memory of those who were deported from their homeland by Stalin on 18 May 1944.

EUAM’s Open Doors event was part of a range of activities organised by the EU in Ukraine and the Kyiv City Authorities in honour of Europe Day.

Pictures in the following album can be used freely as long as the source is acknowledged (EUAM Ukraine). 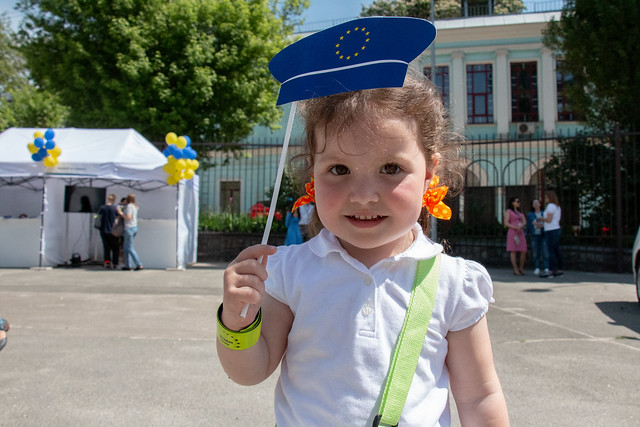 EUAM opens its doors to the public for Europe Day is licensed under a Creative Commons Attribution-Share Alike 4.0 License.