Since its establishment in 2014, EUAM has been committed to all regions of Ukraine. This has mainly taken place through mobile teams that have moved around and carried out various support projects across the country. In May 2016, the Mission deepened its regional commitment by creating two Field Offices, one in Lviv and one in Kharkiv. Another Field Office was created in Odesa, in March 2018, and a fourth in Mariupol, in May 2020. This has helped EUAM to deliver on its mandate across the whole country. 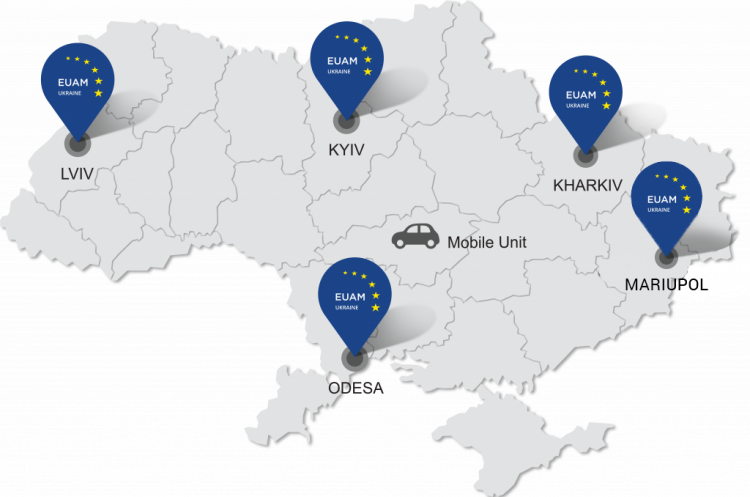 Download Field Office factsheets by clicking on the images below.

EUAM staff – 21 in Lviv, 21 in Kharkiv and 22 in Odesa – have established close working relationships with local Ukrainian authorities in both regions so that the Mission can tailor its advice and assistance according to local needs. Field offices staff have supported local authorities such as the police, including the police academies and training centres, prosecutor’s office, and anti-corruption agencies. Local experience in reform of the civilian security sector informs strategic decision-making at central level, and at the same time, central-level reforms must be rolled out in the regions. Ukraine is a large country, therefore effective coordination between Kyiv and the regions is key to reform efforts, and something that EUAM is assisting with.

EUAM has already made some impact in Ukraine’s regions. For example, the model police station project carried out in Sambir, Lviv region, helped to reduce response times to emergency calls and increase the level of trust in the local police. The Field Offices will also be supporting the European Union’s SPRU (Support to Police Reform in Ukraine) project, which was launched in April 2017 and aims to increase the effectiveness and public trust in the police, particularly in the areas of public order and community policing.

The priority areas for EUAM’s Field Offices mirror those of the Mission in general: community policing, criminal investigation, delineation of competencies, human-resource management, and public order; as well as the cross-cutting issues of good governance, anti-corruption, and human rights. The regional presences are staffed by advisors/trainers in community policing, criminal investigation, public order, and rule of law; while Kyiv-based staff then provides any additional support needed.